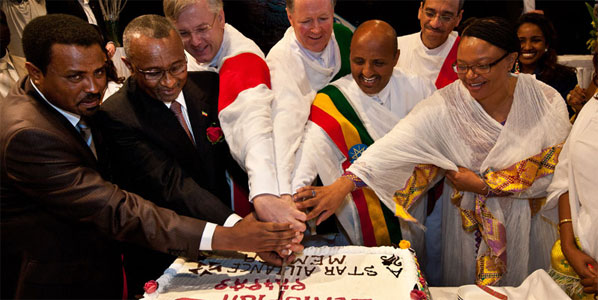 This week, Ethiopian Airlines celebrated a major milestone in its history when it officially joined Star Alliance, the 28th airline in total to do so, and third in Africa after South African Airways and Egyptair. The airline has grown rapidly in recent years, more than doubling passenger numbers in the last six years, and currently operates a fleet of 42 passenger aircraft. These comprise five 777-200LRs, 11 767-300ERs, seven 757-200s, five 737-700s, six 737-800s, and eight Q400s. The carrier has outstanding orders for a further nine 737-800s, 10 787-8s (the first of which is due next year) and 12 A350-900s. 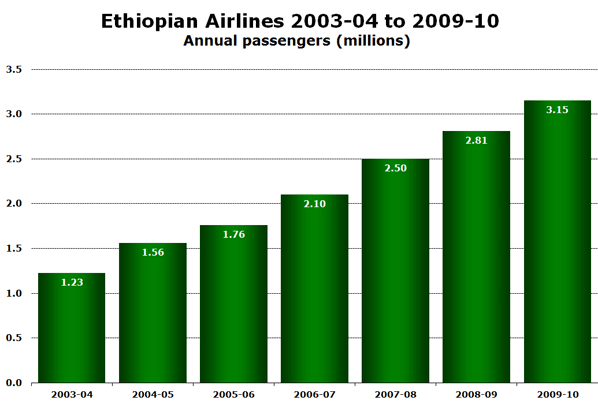 During this year, Ethiopian has launched new routes from Addis Ababa to Malakal (in South Sudan), Hangzhou (China) and Milan Malpensa (Italy), as well as adding new regional services from Bahir Dar and Mek’ele in Ethiopia to Khartoum in Sudan.

Analysis of the airline’s network by ASKs (Available Seat Kilometres), which takes into account weekly frequency, distance and aircraft size, reveals that two of the top three routes (which are operated non-stop in both directions with the same frequency) are to destinations in China; Guangzhou and Beijing. 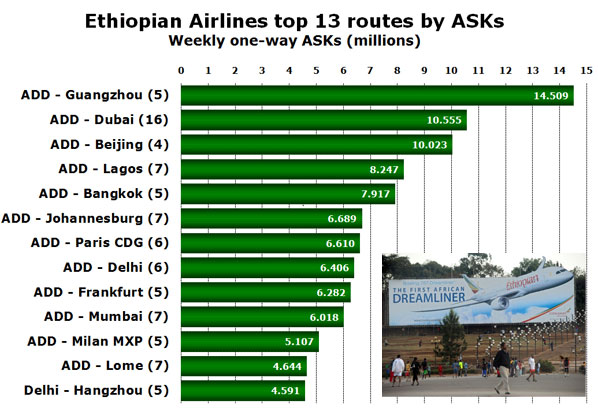 However, it should be noted that the six times weekly Washington Dulles – Addis Ababa sector generates 20.9 million ASKs per week, but the outbound flight between Addis Ababa and Washington operates via Rome. Similarly, the airline’s 15 weekly flights between Addis Ababa and Rome generate 15.2 million ASKs per week but only seven of these return directly to Ethiopia. Six of the flights head over the Atlantic to Washington, while the remaining two head off for London Heathrow from where they head straight back to Addis Ababa. Such scheduling quirks help explain why London Heathrow, Rome and Washington do not appear in the above graph.

“Today we have taken a large step forward in completing our Africa strategy,” said Jaan Albrecht, outgoing CEO of Star Alliance. “With Ethiopian Airlines now part of the Star Alliance network, we offer our customers the widest choice of flights connecting to, from and within Africa. Moreover, Ethiopian Airlines will bring the Star Alliance customer benefits to more markets across Africa, a region of the world in which air travel is enjoying steady growth rates.”

“It is another historical milestone for Ethiopian to join this most prestigious and longest serving Alliance in the world,” said Tewolde Gebremariam, CEO Ethiopian Airlines. “This day will remain colourfully marked in our history book. It is in line with our efforts to lay a strong foundation for the airline to achieve its vision 2025 objectives.”