Is India’s domestic market too competitive to be profitable? Six major routes served by all seven Indian airlines 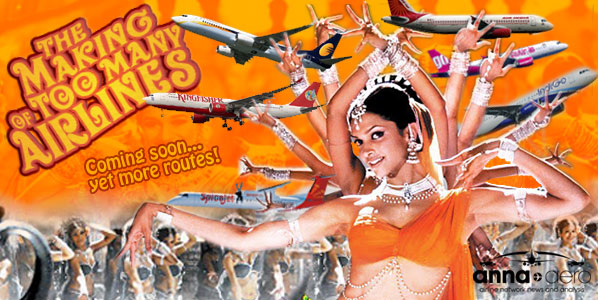 The magnificent seven? OAG data for December shows all seven Indian carriers compete head-to-head on six major city pairs, all involving either Delhi or Mumbai, and including Delhi-Mumbai itself, which is not surprisingly the busiest domestic route.

The Indian domestic market is booming. In the first 10 months of this year passenger numbers are up 18.3% (Source: DGCA India) to 49.6 million, thus firmly establishing it as the fifth biggest domestic air travel market in the world, based on weekly seat capacity. The US domestic market is still by far the world’s busiest, although China’s domestic market is growing rapidly and could become the biggest within 10-15 years. Brazil has recently passed Japan for third place while India needs to watch out for fast-growing Indonesia in sixth place. Spain, Europe’s largest domestic market, ranks only ninth just ahead of Germany and Italy. 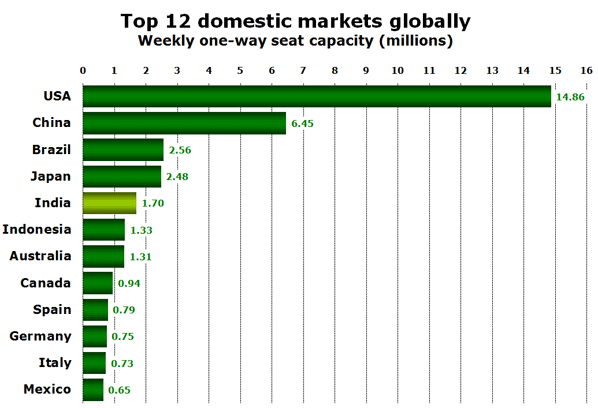 Seven carriers each with between 6% and 20% of market

But, despite the surge in passenger demand, India’s major airlines admit to facing ruinous competition, a startling development in a country long known for its tight regulation, state intervention and central economic plans. Despite the demise of MDLR (in 2009) and Paramount (in 2010) the Indian domestic market is still served by seven airlines (if you count Jet Airways and JetLite as separate carriers) all of which have between 6% and 20% of the market. 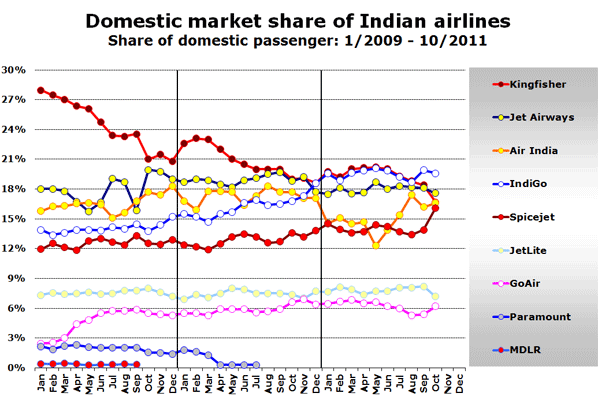 A closer look at OAG data for December reveals that all seven carriers compete head-to-head on six major city pairs. All six routes involve either Delhi or Mumbai, and not surprisingly, includes the country’s biggest domestic route between these two cities. 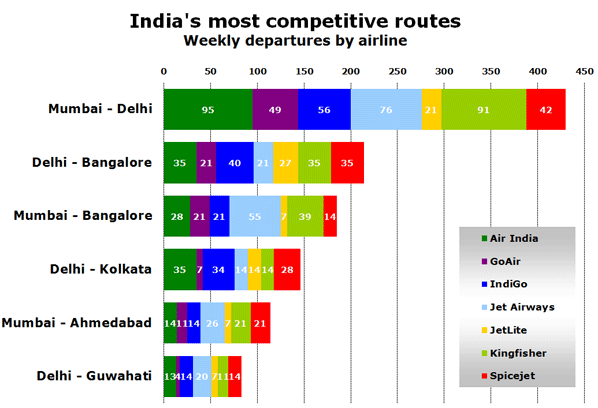 In addition there are over a dozen further domestic routes where six of the seven airlines compete head-to-head with each other. While competition is always good for the consumer, this level of competition appears to be having a detrimental effect on the profitability of the airlines as price remains a key driver in airline choice, especially in such a rapidly developing market. SpiceJet's Hyderabad-Tirupati launch - an anna.aero Cake of the Week in September and one of five new routes in a single week with its new Q400s. The new twice daily service is probably an unwelcome headache for the incumbent airlines on a route already served with dailies by Air India, Kingfisher, and Jet Airways - clearly SpiceJet hopes the flexibility of its fast 78-seat turboprops will be the undoing of its competitors.

The Indian market is so competitive that using OAG data for December, anna.aero has identified just five city-pairs that are served twice-daily (in both directions) by just a single carrier. These somewhat surprising city pairs are therefore the biggest ‘monopoly’ routes in the Indian domestic market.