Ryanair makes Palma de Mallorca a base; will increase route network from 30 to 47 routes next summer 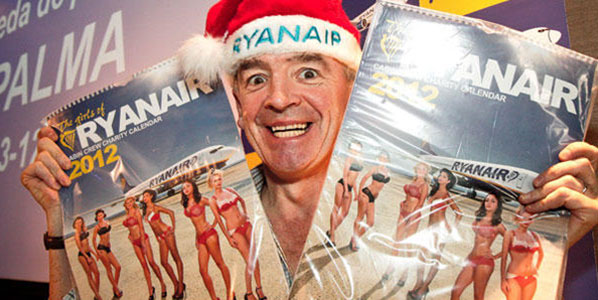 All in the best possible taste: MOL at the PMI base launch - nine of the new routes are to destinations in the Baltic, Nordic and Central Europe and a three further domestic Spanish destinations, of which only two will compete with the airport's biggest carrier airberlin. Ryanair expects to raise €100,000 for charity from sales of its cabin crew calendar, which you can buy from here.

Since launching flights to Palma de Mallorca in March 2007 (from London Stansted), Ryanair has carried around 5.7 million passengers to and from the airport. According to Aena statistics, Ryanair transported 276,552 passengers at Palma in 2007, rising to 510,870 in 2008. In 2009, this doubled to 1,081,375 and in 2010 there was growth of almost 50% to 1,611,191. This year has seen further growth and Ryanair has now overtaken Air Europa to become the airport’s second-busiest airline after the combined might of airberlin and its Austrian subsidiary niki. With just December figures to be reported, Ryanair has handled just over 2.2 million passengers at the airport, giving it a 10% share of traffic. Now, Ryanair has announced that it will base four 737-800s at the airport from next summer and increase the number of destinations served from 30 to 47.

According to OAG data, Ryanair served 31 destinations non-stop from Palma during the summer of 2011. This includes two destinations, Alicante and Reus, which have since been dropped.

Only two international routes are served year-round by Ryanair from Palma; Brussels Charleroi and London Stansted. The remaining five year-round routes are all domestic services; to Barcelona, Girona, Madrid, Seville and Valencia.

When Ryanair recently announced its new base at Karlsruhe-Baden starting next March, one of the seven new routes revealed was Palma de Mallorca. In addition, Ryanair has revealed a further 17 new destinations that will commence at the end of March 2012.

Nine of the new routes are to destinations in the Baltic, Nordic and Central European states of Denmark, Finland, Lithuania, Norway, Poland and Sweden, while there are three further domestic Spanish destinations. Of these destinations, the only ones on which Ryanair will compete head-to-head with the airport’s biggest carrier airberlin, are Malaga and Santiago de Compostela.

In Palma, Ryanair’s CEO Michael O’Leary said: “Ryanair is delighted to announce Palma as our 49th base with a total of 47 routes on sale on www.ryanair.com from tomorrow for summer 2012. Now Palma consumers/visitors can beat the recession and escape both Air Europa and Air Berlin’s high fares by switching to Ryanair’s lowest fares and enjoy our no fuel surcharge guarantee to 47 exciting destinations. Ryanair’s traffic of 2.8m p.a. will sustain up to 2,800 jobs at Palma Airport and in the tourism industry on the island of Mallorca.”