Dalian launches Shenzhen services on December 31 2011. (In case you have not heard of Dalian, it’s merely a city of four million with an airport handling over 10 million in 2010.)

The world’s second biggest aviation market (China) welcomed a new carrier right at the end of 2011 when Dalian Airlines launched operations. The carrier is a joint venture between Air China (80%) and the Dalian regional government (20%), and has begun services with an initial fleet of two 737-800s. So far the route network comprises daily flights to Beijing, Shenzhen and Taiyuan, with onward flights from Taiyuan to Sanya.

Dalian Zhoushuizu International Airport serves Dalian, a major city on China’s north-eastern coast with an urban population of almost four million people. In 2010, the airport handled 10.7 million passengers, up 12.1% on 2009, and ranking it as China’s 16th busiest airport. 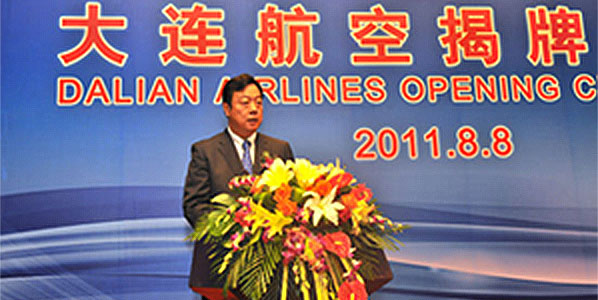 China Southern is the dominant carrier at Dalian Airport, serving 32 destinations non-stop, and accounting for around 35% of scheduled seat capacity at present. Second-ranked Air China has only 12% of seat capacity and serves just 11 destinations non-stop. According to OAG data, 23 airlines (not including Dalian Airlines) currently operate scheduled flights at the airport, including several foreign carriers; notably ANA, Asiana, China Airlines, JAL, Korean Air, and UNI Air. 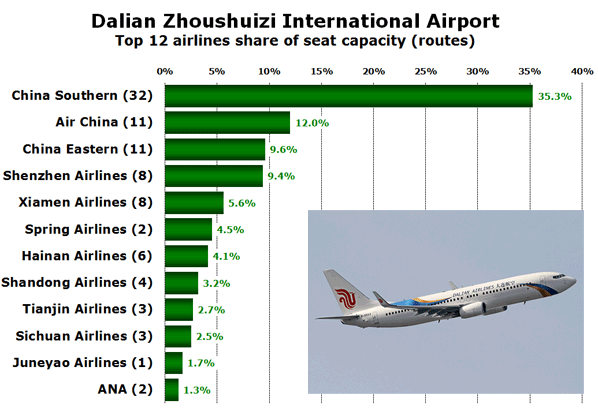 Not surprisingly, the two biggest routes at the airport are to the country’s two biggest cities, Beijing and Shanghai. Between them, these two routes account for almost 30% of the airport’s scheduled seat capacity. A total of 49 destinations are served with non-stop flights. 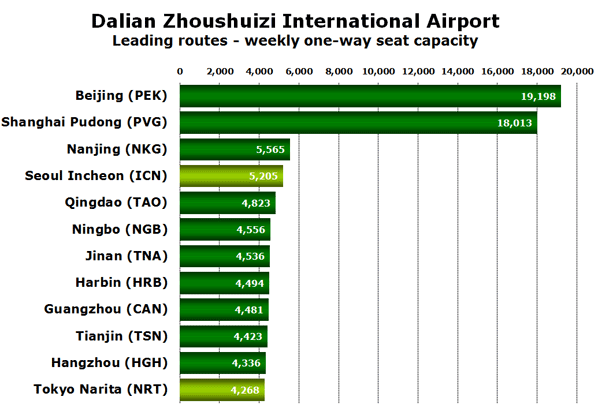 Apart from a wide range of services within Mainland China, the airport also has services to Hong Kong, Japan, South Korea and Taiwan. Two of the international destinations (Seoul and Tokyo) make it into the top 12 of routes (shown in light green).