The Maldives (or Maldive Islands) comprise 1,190 islands (of which around 200 are inhabited) that are grouped into 26 natural atolls scattered over 90,000 square kilometres, located around 250 kilometres south-west of the southern tip of India. It is officially the smallest Asian country, but despite this has an active aviation market as a result of its tourism appeal, notably for diving enthusiasts. With the highest point less than three metres above sea level it comes as no surprise that the country’s inhabitants are particularly concerned about the potential effects of global warming.

Tourism has been a growing part of the economy since the early 1970s. The country’s main gateway is Malé International Airport (built in 1960), which is on an island that only houses the airport and related facilities. To get to resort facilities requires a transfer either to a seaplane or a speedboat. Not surprisingly the Maldives has one of the largest seaplane fleets in the world.

Based on analysis of OAG schedule data for January the leading country markets for air travel from Malé airport are Sri Lanka and the United Arab Emirates. Emirates (twice daily), Etihad (daily since 1 November 2011) and Qatar Airways (twice daily) all serve Malé from their bases in the Middle East. 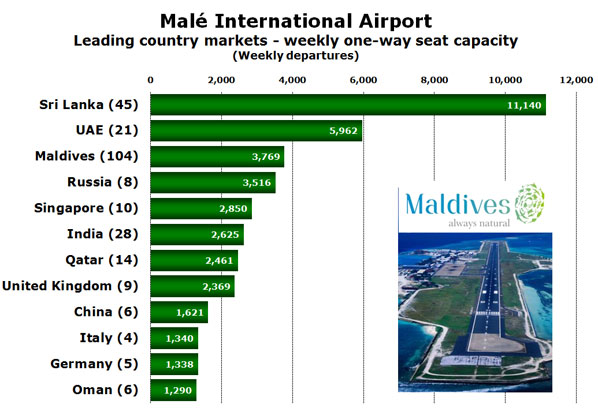 Russia appears to be the biggest European market for scheduled services thanks to Aeroflot and Transaero both serving Moscow. Indian services are focussed on Trivandrum which is the busiest airport in the southern tip of India, and thus geographically the closest.

For most of the last decade the main airport (recently renamed as Ibrahim Nasir International Airport, in honour of the country’s second President and driving force behind its creation) has handled between 1.5 and 2.5 million passengers annually, with demand peaking in the northern hemisphere winter months (December, January). Since late 2010 the airport has been run by GMR Malé International Airport, a joint venture between GMR Infrastructure Limited of India (77%) and Malaysia Airports Holdings Berhad (23%). According to GMR the airport handled 2.6 million passengers in 2009 while traffic was up 20% in the first six months of 2010.

In the middle of December a special ceremony was held to celebrate the breaking of ground on the planned new terminal on the eastern side of Hulhulé Island, which is scheduled to open in 2014.

Local carrier Maldivian, which operates a small fleet of five turboprop aircraft, provides domestic connections from Malé to five other airports across the Maldives; Gan (GAN), Hanimaadhoo (HAQ), Kadhdhoo (KDO), Kaadedhdhoo (KDM), and Fuvahmulah (FVM), the airline’s most recent destination which has been served four times weekly since last November. Maldivian also operates daily flights to Trivandrum in India. Until 2008 the airline was known as Island Aviation, but once regional flights to India were introduced it was felt that a more distinctive name was required to reflect the airline’s origins. 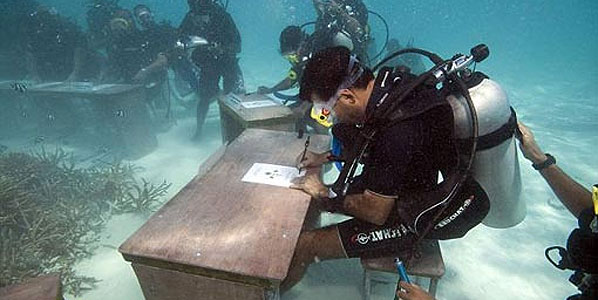 Wrestling with dilemmas: The Maldives thrives on tourism – but is fearful of global warming. In 2009, President Nasheed famously held a cabinet meeting under water to underline the perceived threat to the Maldives where the highest point is just three metres above sea level. He was back in the news this Christmas with a now-rescinded decree to close the luxury spas, which are an essential component to the islands’ resorts, in a reaction to concerns maintained by Sunni Muslims who make up the majority of the archipelago’s 400,000 population.