With each route involving two airports, we have identified which are the leading countries for new service development. Surprisingly, US airports feature 250 times (out of a possible 1662 instances), followed by UK airports (139), airports in Germany (137), Spain (128), Italy (118) and France (116). These are the same six countries that led the way in early 2011, mainly because they are also in the most liberalised regions.

The new year may be less than a week old, but anna.aero can exclusively reveal that the world’s airlines have already revealed plans to start over 750 new routes this year. According to our research, last year saw the world’s airlines launch over 2,200 new routes, down on the 2,400 we identified in 2010, but more than the 2,100 we tracked in 2009. This time last year, we were aware of around 600 new routes starting in 2011.

Leading the way (as usual) is Ryanair with some 60 new routes already planned to start this year. This does not include the resumption of seasonal services which the airline rather confusingly also lists in the “New routes” section of its website. Lufthansa runs Ryanair close this year with the planned launch of almost 60 new routes, around half of which will be from Berlin’s new Brandenburg Airport when it opens in early June. 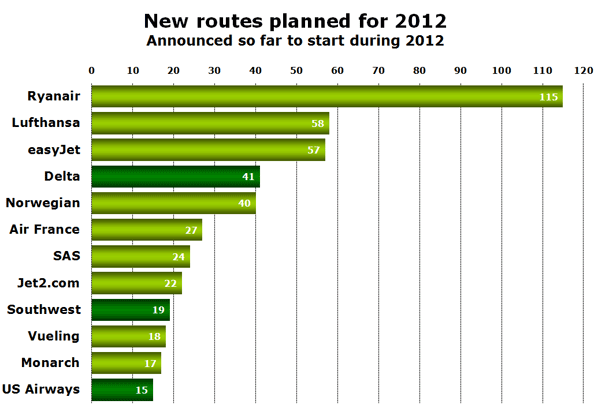 While European airlines take nine of the top 12 positions, three US carriers will also be particularly busy with new route launches in 2012. Delta and US Airways’ ‘slot-swap’ at Washington Reagan and New York LaGuardia means that both of these carriers will have multiple route launches to celebrate this summer, while Southwest’s acquisition of AirTran opens up the opportunity to launch several new routes from Atlanta, as well as adding new services between several of its existing airports across the US. In total, we have so far identified over 130 airlines that plan to launch new services in 2012.

US leads way with most new routes followed by Germany

With each route involving two airports (one at each end of the route), we have identified which are the leading countries for new route development. Surprisingly, given the modest growth in the overall market, US airports feature 250 times (out of a possible 1662 times), followed by UK airports (139), airports in Germany (137 times), Spain (128), Italy (118) and France (116). These are the same six countries that led the way in early 2011. Of course, the US and Europe are in many respects the most liberalised regions for air travel, so this should come as no great surprise.

Although European and North American carriers dominate the rankings for starting most new routes, it is worth taking a closer look at what the Middle East “MEB3” airlines have announced so far for 2012.

Again, all three of these carriers are likely to announce additional routes in the coming months that will start before the end of 2012.

Boeing’s 787 Dreamliner finally entered commercial service in 2011, and 2012 will see the aircraft’s first customers launch the first new routes with the type. Before the end of January, ANA will launch flights from Tokyo’s Haneda Airport to Frankfurt using the 787 while in April rival JAL will begin four-times weekly flights from Tokyo Narita to Boston with its 787.

With 2012 being an ‘even’ year, there are several major sporting events which may (or may not) stimulate air travel demand in certain regions. London hosts the summer Olympics (in August) for the first time since 1948, but whether the country’s airports will see any noticeable uptick in demand is open to debate. Meanwhile, football fans will be flocking to Poland and the Ukraine (in June) for UEFA’s Euro 2012 championships. The World Indoor Athletics Championships are in Turkey (in March), the European Athletics Championships will be in Helsinki (in June), while motor racing’s Formula 1 series will (hopefully) touch down in the USA (Austin to be precise) for the first time in several years in November.

For seekers of more unusual competition in exotic locations, this year’s 57th Eurovision Song Contest will be held in Azerbaijan’s capital Baku at the end of May.

Fuel prices remaining high, the introduction of aviation into the European Emissions Trading Scheme (ETS), and further consolidation appear to be the key topics for many airlines as we enter 2012. Our database of planned new routes for 2012 suggests that airlines are still eagerly embracing new routes, but this does not necessarily mean that global demand will grow that quickly this year. Routes will continue to be dropped (although usually with little fanfare or publicity), while network planners, demand analysts and schedulers will continue to tweak weekly frequencies and the allocation of aircraft types on specific routes on an on-going basis.

Whatever happens, anna.aero will be bringing you the latest data, news, analysis and pictures during what will no doubt be yet another eventful year for our industry.