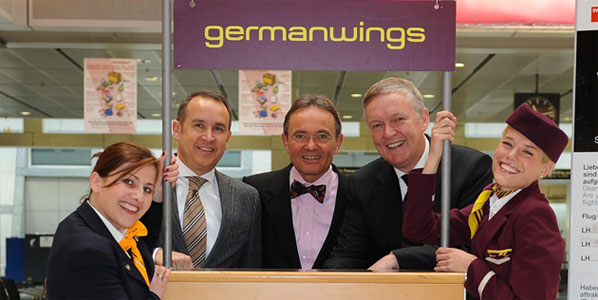 The route-swap announcement in Stuttgart: Oliver Wagner, SVP Direct Services Lufthansa, Georg Fundel, Managing Director Stuttgart Airport, and Thomas Winkelmann, Managing Director germanwings. There’s a missing smiling face – as a result of the changes Lufthansa has terminated its franchise contract with Contact Air. (We are indebted to our colleagues at Bild Stuttgart for this photo.)

In mid-December, Lufthansa announced that it would be transferring all of its international services from Stuttgart to its low-cost subsidiary germanwings, starting with the London Heathrow route in February. A total of six routes (five international and one domestic) are being transferred, while a further three new routes (to Catania, Dubrovnik and Venice Treviso) will be launched during the summer season. As a result, germanwings will then have 10 A319s based at Stuttgart and will be serving a total of 47 destinations non-stop this summer. 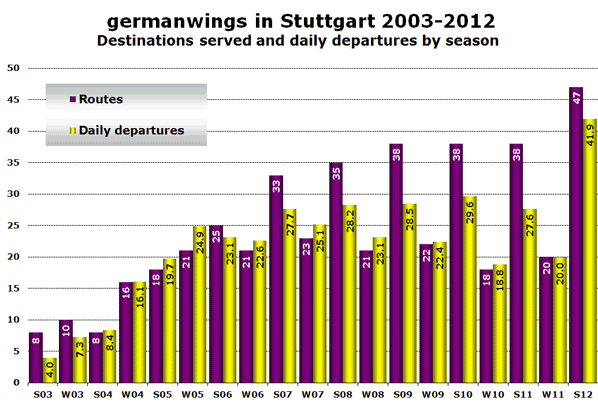 After establishing a base at Stuttgart in September 2003, germanwings grew from operating just eight routes in its first season to over 30 by the summer of 2007. Between 2007 and 2011, there was little growth in summer flights, although the number of destinations in summer rose to 38. However, winter capacity fell steadily between 2007 and 2010 before growing slightly this winter. The addition of these new routes will see germanwings’ summer capacity at Stuttgart in 2012 rise by around 50% on a year-over-year basis.

By transferring its London Heathrow services to germanwings from 20 February, Lufthansa’s LCC will become just the second LCC (after Vueling) to serve Europe’s busiest airport. The other destinations being reallocated to germanwings this summer are Bilbao, Bremen, Brussels, Manchester and Milan Malpensa. The following table shows the start dates, planned weekly frequencies this summer and which airlines operated the route last summer.

The decision to basically maintain frequency on four of the six transferred routes means that Lufthansa is expecting germanwings to be able to stimulate demand by around 100% on the Brussels route, 80% on the Manchester routes and by around 50% on Bremen and London Heathrow. On Bilbao and Milan Malpensa, frequencies have been reduced to compensate to some degree for the increase in aircraft size.

Bad news for Contact Air; what now for its eight Fokker 100s? 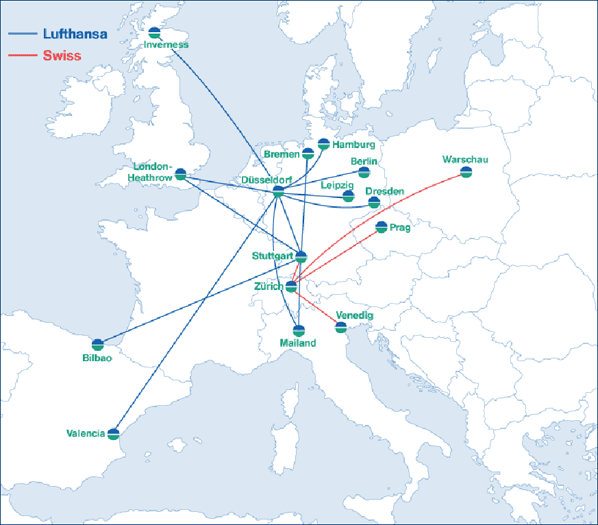 Contact Air which currently operates some of these routes on behalf of Lufthansa, operates a fleet of eight Fokker 100s, six of which are used for operating Lufthansa services from Düsseldorf (to Berlin, Dresden, Hamburg, Inverness, Leipzig, London Heathrow, Milan Malpensa and Valencia) and Stuttgart (to Bilbao, Bremen, Düsseldorf, London Heathrow and Milan Malpensa). The other two are used for operating Swiss services from Zurich to Prague, Stuttgart, Venice and Warsaw.

It has been reported that Lufthansa has terminated its contract with Contact Air and that all such flying will cease at the end of the summer 2012 season. This would indeed be bad news for the airline which has been providing capacity as part of Team Lufthansa and then Lufthansa Regional since 1996.

Carsten Spohr, Member of the Executive Board and CEO Lufthansa Passenger Airlines, said: “With a joint market share of close to 40 per cent, Lufthansa and germanwings are clear market leaders in Stuttgart. The new timetable with optimal departure times is ideally suited to customer demand in the Stuttgart metropolitan area. We want to be present as market leader in Stuttgart with a convincing range of services for business and leisure travellers, since the Lufthansa Group sets great store by the economically strong Baden-Württemberg region.”