Route of the Week: Delta’s Honolulu to Fukuoka Cake of the Week: Condor’s Frankfurt to San Juan A giant cake of Puerto Rico was on offer at Frankfurt Airport when Condor launched flights to San Juan on the Caribbean island. Ralf Teckentrup, CEO Condor, and Stefan Schulte, CEO Frankfurt Airport, cut the cake for the first passengers to enjoy, before cutting the ribbon for the new twice-weekly service.

The rest of the last three weeks’ new routes Citizens of Bayannur in China’s Inner Mongolia now have a non-stop flight to the capital Beijing four times weekly on Air China. 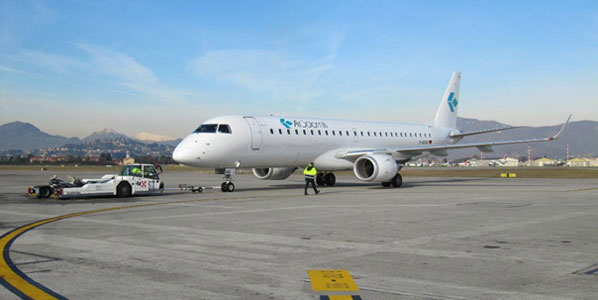 Air China’s Dalian-based joint venture launched operations at the end of last year with a route to Shenzhen in southern China, immediately followed by two further routes, one of which is a stopping service. 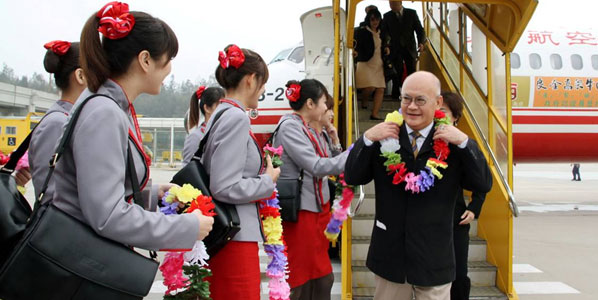 Passengers arriving in Kinmen on Far Eastern’s first flight from Kaohsiung were welcomed with garlands. Well, these pictures are from Frontier’s December 16 launch of flights from Madison, Wisconsin to Orlando, Florida and as we just got them, we thought they were just as good as photos from the more recent Washington Reagan launch... While the launch event in Guangzhou for Jetstar Asia’s new route from Singapore was relatively small, there were greater celebrations when the route was announced. The low-cost airline’s CEO Chong Phit Lian led both events. 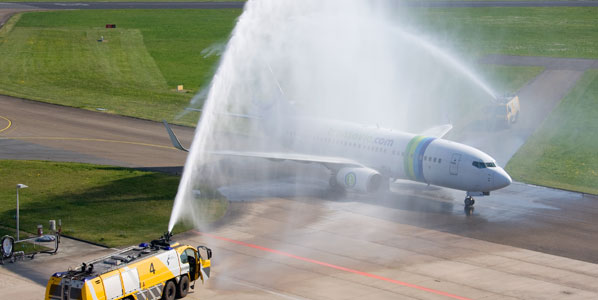 For the first time, Groningen in northern Netherlands offers scheduled services to the Alps. Transavia.com is here seen welcomed to the airport after its first Salzburg flight. 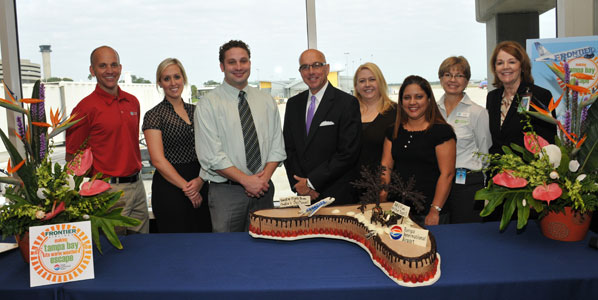 On 15 December, passengers on Frontier’s first of seasonal flights to and from Omaha, Nebraska and Des Moines, Iowa were welcomed at Tampa International Airport in Florida with this impressive cake shaped as the ‘Sunshine State’. The event was hosted by the airport along with its tourism partners Tampa Bay & Company and the St. Petersburg/Clearwater Area CVB.

Other celebrations over the last few weeks

Warsaw Airport reached the 9-million passenger mark on 9 December 2011. The lucky traveller received a goodie bag, inclusive of free entry to Executive Lounges, while on his way to a romantic weekend in Paris. The airport handled a total of 9.3m passengers in 2011, the second-best result in its history. 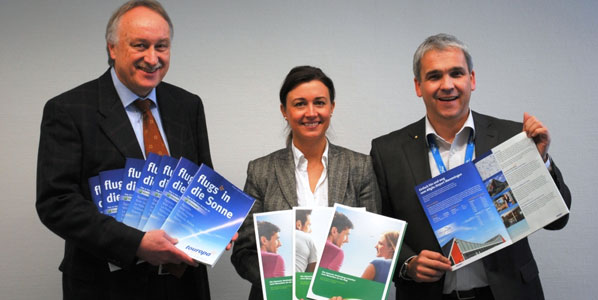 More holiday options at Allgäu Airport in Memmingen in southern Germany have been announced at a press conference held jointly by the airport and Germania Airlines. The carrier, which is a newcomer to the airport, will link Memmingen with Gran Canaria, Palma, Cyprus, Antalya and Hurghada, beginning in May 2012. Posing for the camera were Georg Eisenreich, managing director touropa, Judith Haase, marketing manager Germania, and Ralf Schmid, CEO Allgäu Airport Memmingen. On 30 December 2011, Porto Airport in northern Portugal welcomed its 6-millionth passenger for the first time in history. To celebrate, Fernando Vieira, the airport’s director had prepared some surprises, including a free flight to Madrid, for the lucky passenger Teresa Garcia. The milestone came just one year after Porto Airport passed the 5-million mark in 2010. 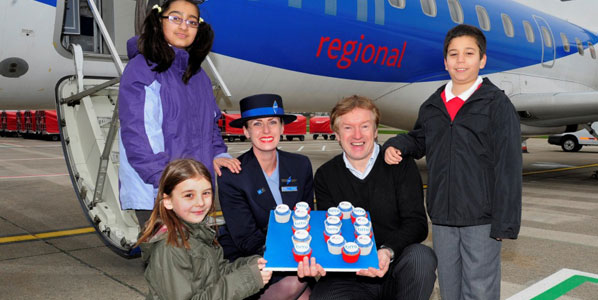