No longer a force in India? Kingfisher slips from first to fifth in domestic market in just four months anna.aero’s publisher talked to Kingfisher Chairman Vijay Mallya and the airline’s CEO Sanjay Aggarwal in the hope of providing first hand insight for this article. In fact, all Hogan contributed were these photos: “They would only talk about whisky, they wouldn’t even talk about motor racing” bemoaned our investigative boss. Indeed, Mallya's Force India F1 team, referred to in our headline, has also been in trouble, and recently acquired new shareholders to become Sahara Force India. Virgin’s Branson and Air Asia’s Tony Fernandes also collect F1 teams.

Although only launched in May 2005, Kingfisher Airlines, guided by the industrial tycoon Vijay Mallya, grew quickly, both organically and through the acquisition of Air Deccan, to become the biggest single carrier in the Indian domestic market in less than four years. However, since the start of 2009, it has seen its market share fall by half from 28% in January 2009 to just 14% in November 2011. 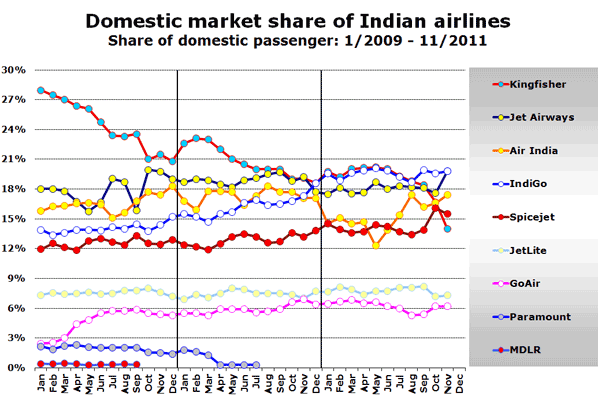 Despite its gradual loss of market share as recently as August, it was still just ahead of IndiGo and Jet Airways, but the latest figures for November show that it has fallen behind both of these carriers as well as Air India and SpiceJet.

The airline’s current international network comprises 17 routes to eight airports in eight different countries. Colombo is served from four Indian airports while Bangkok and Dubai are both served from three airports; Hong Kong and London Heathrow each from two, though the frontier-busting Bangalore – London route is no longer served.

Over 10% of Kingfisher’s passengers are currently flying on international services and in the first 10 months of 2011, over one million passengers were carried on international flights at a load factor of 75.5%. Despite only operating a modest number of international routes they currently account for just over 40% of the airline’s capacity, as measured in ASKs (Available Seat Kilometres). 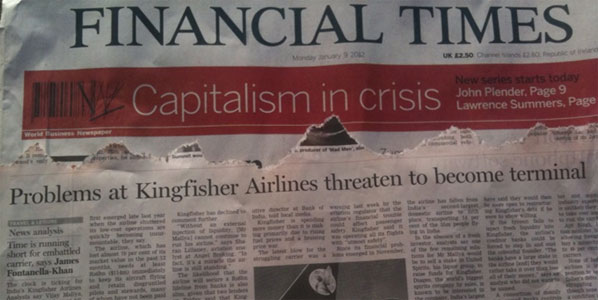 This week’s unflattering financial coverage. Meanwhile, it was confirmed at Christmas that Kingfisher would join the oneworld alliance in February. We at anna.aero used to think oneworld was the slightly boring but solid alliance grouping. But this year, besides Kingfisher, oneworld will also welcome airberlin and Malaysia Airlines, none of whom are what you might call solidly profitable airlines.