Rio traffic up 20% in 2011, starts 2012 by welcoming Emirates; Alitalia, KLM and Lufthansa all new last year Emirates’ new route from Dubai to Rio de Janeiro, which continues on to Buenos Aires, has immediately made the Gulf carrier Rio’s biggest foreign airline – and fifth-largest overall. Emirates’ entry comes at a time of rapid expansion at the airport, which saw its traffic grow by around 20% last year.

Rio de Janeiro’s Galeão International Airport had a record 2011, handling almost 15 million passengers, which currently ranks it fourth in Brazil after both airports in São Paulo, and Brasilia (the airport serving the nation’s capital). Last week saw the arrival of the first Emirates flight from Dubai, which then continued on to Buenos Aires in Argentina. This major new international service will help to further cement the airport’s position as the country’s second busiest international airport. Around 25% of the airport’s traffic is on international services. 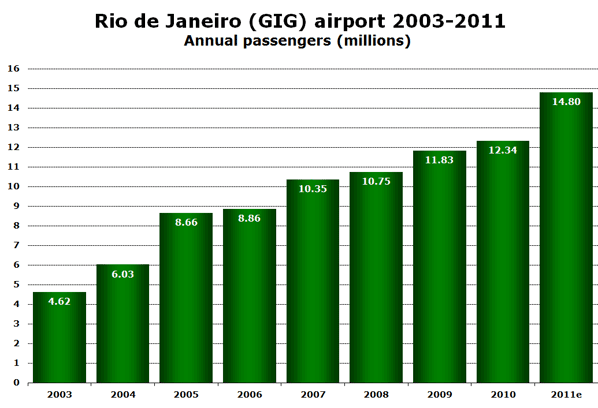 In just eight years, passenger numbers at the airport have more than trebled from just over 4.5 million in 2003 to their current levels. In 2011 alone, traffic has risen by around 20%. 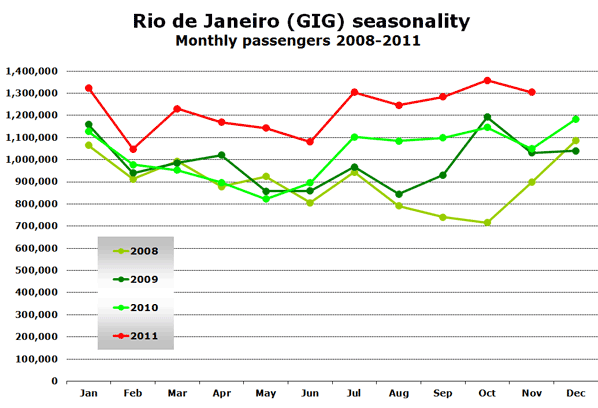 Traffic peaks typically occur in October and January. Monthly traffic has been up by more than 10% every month this year with the exception of February (+7%).

The airport’s biggest carriers are Brazil’s two biggest airlines; GOL and TAM. Between them, they share almost 70% of all scheduled seat capacity. WebJet ranks third with just 6% of the market, while Azul is fourth with less than 5%, having only started operating from the airport last February. It now serves five destinations non-stop, three of which started in late December. Emirates, thanks to its flights to Dubai and Buenos Aires, jumps straight into fifth place. 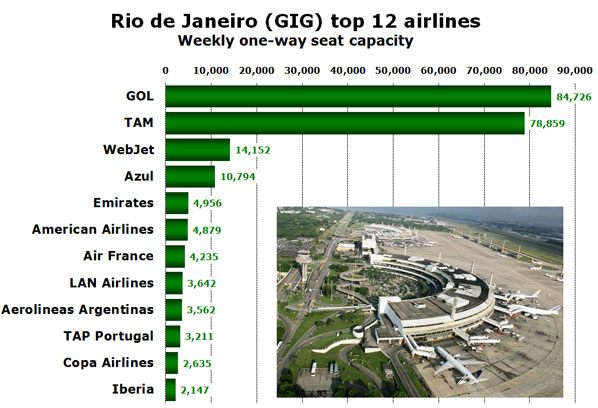 American Airlines is the only US carrier in the top 12, but United, Delta (Atlanta), Continental (Houston) and US Airways (Charlotte) are all among the top 20 of the 26 airlines currently operating scheduled services at the airport.

The US and Argentina are the biggest international markets, but there are plenty of non-stop services to Europe as well. TAM serves London and Paris with non-stop flights, while Air France (Paris CDG), British Airways (London Heathrow), Iberia (Madrid), and TAP Portugal (Lisbon and Porto) have all been serving Europe for a while.