Ryanair’s COO & Deputy CEO Michael Cawley with Fred van der Meer, CEO Hermes Airports. (Note: Cawley is 57, not 50.) Ryanair becomes the leading airline at the Cypriot airport with 44 weekly departures – ahead of easyJet and Thomson with 29 each. The base will place a major focus on Italy and Greece – prior to Ryanair's announcement the UK represented 90% of seat capacity at Paphos this summer.

Ryanair has announced Paphos in Cyprus as its 50th base, and fourth new base for 2012 (following Karlsruhe-Baden, Billund and Palma de Mallorca). Unlike these other airports, Ryanair does not currently serve Paphos. From the beginning of April, a total of 14 destinations will be served, half of which will be either in Greece or Italy, two country markets that Ryanair appears to be particularly keen on growing in 2012.

Only one of the 14 routes is to the UK which, prior to Ryanair’s announcement, represented almost 90% of all scheduled seat capacity at the airport this summer, with British Airways, easyJet, Jet2.com, Monarch, Thomas Cook and Thomson Airways all active in the market.

In 2010, Paphos Airport handled 1.6 million passengers (compared with 5.4 million at Larnaca, the other main airport in the country). In June, July and August, passenger numbers were up by more than 10% at the airport, and for the first eight months of the year as a whole demand was up almost 11%.

Although there is minimal direct competition to Ryanair’s services at Paphos, Larnaca offers a certain amount of indirect competition with Cyprus Airways offering an alternative on six routes, and Aegean, Condor, Lufthansa and Norwegian all ‘competing’ on two routes. 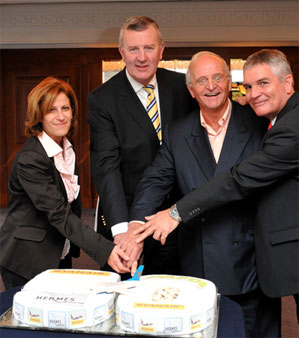 Speaking in Paphos on Tuesday (10 January), Ryanair’s COO and Deputy CEO Michael Cawley said: “Ryanair is delighted to announce Paphos as our 50th base with 14 routes beginning in April next which go on sale on www.ryanair.com tomorrow. Cypriot consumers/visitors can now beat the recession and escape Cyprus Airways’ high fares by switching to Ryanair’s lowest fares and our no fuel surcharge guarantee to 14 exciting destinations all over Europe including Germany, Italy and Sweden among others. Ryanair’s 600,000 passengers p.a. will sustain up to 600 jobs in Paphos.”

Alfred Van der Meer, Hermes Airport Group Chief Executive, said: “This is a great vote of confidence in the potential of both the airport and our region from Europe’s largest airline. Today’s announcement will help create much needed jobs and tourism and shows that Ryanair shares our confidence in the tremendous opportunity for strong market growth at the airport.”