anna.aero believes the London Games – and a 130 new routes which have already been announced this year – could help UK airport traffic grow three-fold to 3% during 2012. The three leading airports will grow much more – although constrained Heathrow, an obvious beneficiary, falls out of the top 10 for new service announcements.

With London hosting this summer’s Olympics, the world’s media will be heavily focused on the UK this year. But what about the county’s airports? If it’s true that the Games are good for the economy – surely the fortunes of the nation’s airlines and airports are one of the best and immediate indicators. As things stand things are sluggish: Latest CAA data for October 2011 shows that on a rolling year basis passenger numbers at UK airports are up 2.6%, but if the data is adjusted for the spike in growth back in April (due to the volcanic ash saga of April 2010), then underlying growth is less than 1%. 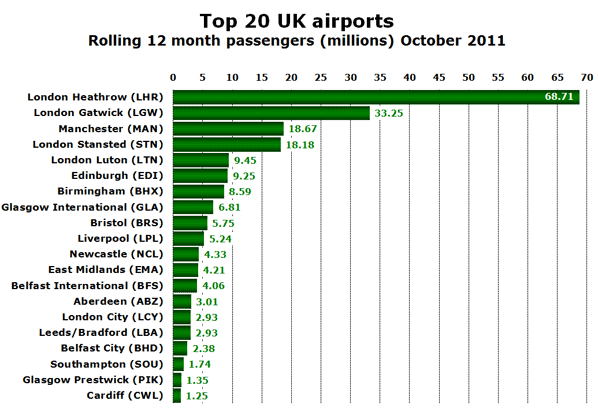 Heathrow and Gatwick combined have managed to increase their market share of UK traffic from 45.9% to 46.9% during the last year, while the UK’s biggest regional airport at Manchester has also grown its share of the UK market from 8.3% to 8.6%, suggesting that when times are tough, bigger airports tend to perform better than smaller ones. Manchester has also re-claimed its long-held third position among UK airports as London Stansted continues to see modest declines in demand.

Only 11 of the top 20 UK airports are growing

A look at the UK’s top 20 airports (all of which handle over one million passengers per annum) reveals that 11 are growing while nine have seen a fall in passenger numbers during the last year. However, it is worth observing that five of the biggest six airports reported growth of at least 4%, while the only top 20 airports to show a double-digit drop in demand were all among the smaller airports. 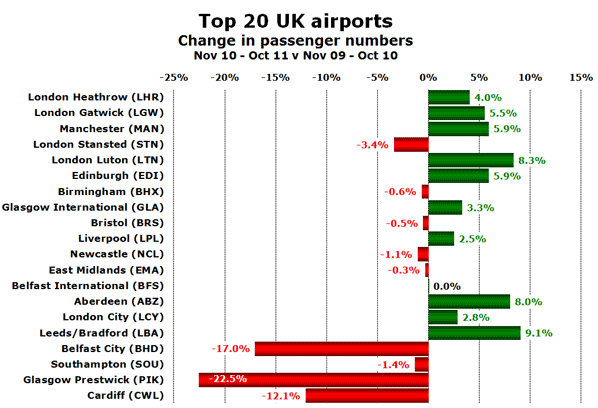 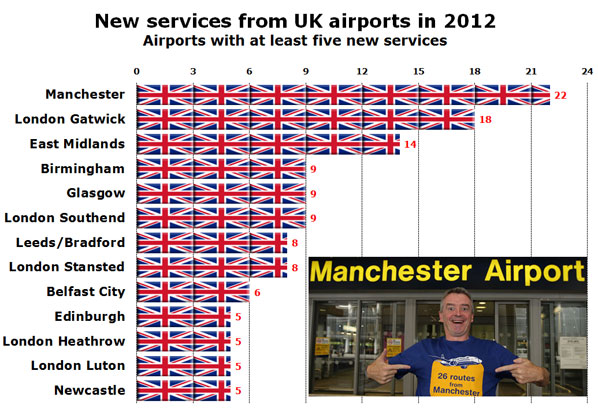 London Gatwick can look forward to at least 18 new services of which 12 are from UK airlines; British Airways (to Algiers and Nice), easyJet (to Bari, Fuerteventura and Kefalonia), Monarch (to Antalya, Dalaman, Dubrovnik, Heraklion, Milan Malpensa and Venice), and Virgin Atlantic (to Cancun). Foreign airlines attracted to the UK’s second busiest airport in 2012 include Air China (from Beijing), Air One (from Milan Malpensa), Hong Kong Airlines (from Hong Kong), JAT Airways (from Belgrade), Korean Air (from Seoul Incheon) and Norwegian (from Gothenburg).

The launch of easyJet operations from London Southend in April helps propel this once-sleepy airport high up into these rankings.

80% of new routes launched by LCCs

Of the over 130 new routes at UK airports already planned for 2012, around 80% are being generated by Europe’s LCCs, with just five carriers (Ryanair, Jet2.com, easyJet, Monarch and bmibaby) accounting for three-quarters of all new routes. Non-UK LCCs adding UK destinations are germanwings, Norwegian, Vueling, WOW Air and Wizz Air. 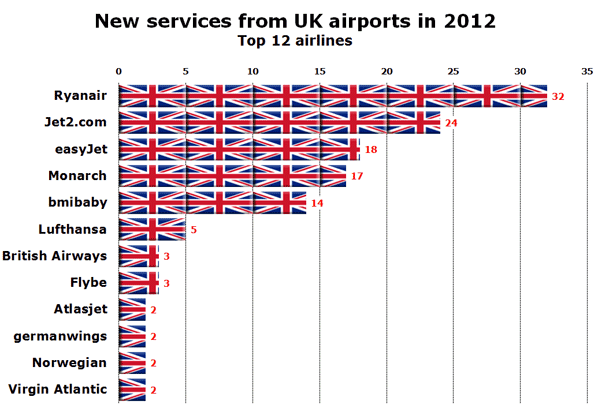 Lufthansa is the leading non-LCC with five new routes. Birmingham and Manchester will be connected with the new Berlin airport when it opens in June. It will also take over the Heathrow to Cologne/Bonn service from bmi at the start of the summer season, while June sees the start of seasonal, weekly service from both Hamburg and Munich to Jersey (although Jersey is not strictly part of the UK).

Lufthansa’s LCC germanwings is starting two new UK routes this year, both from Stuttgart. One of these, to London Heathrow, will make germanwings just the second LCC (after Vueling) to operate flights at Europe’s busiest airport. 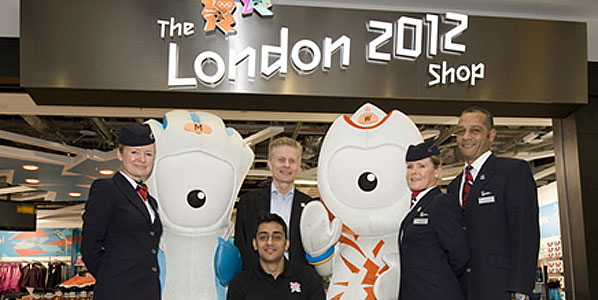 Airports and airlines hope that the London Olympics economic impact will be considerably greater than this retail opportunity at Heathrow Terminal 5, recently opened by Wenlock (the London 2012 Olympic mascot) and Mandeville (the Paralympic mascot).

Will Olympics boost air travel and tourism as much as hoped?

So, despite all the challenges in the UK’s domestic economy, airports continue to be fertile ground for airlines (especially low-cost ones) seeking to launch new routes. The extra global media attention on the country during 2012 will hopefully serve as a giant prime-time TV commercial for British tourism. Combined with the 130 new services already announced, anna.aero believes it is not unreasonable to see that unimpressive 1% growth figure rise to a far more respectable 3% this year – a very acceptable dividend from hosting the Games.