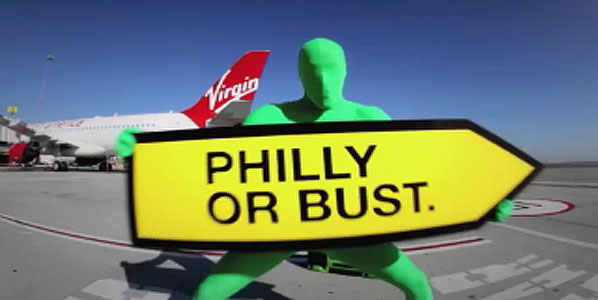 According to the US DOT’s Domestic Airline Fares Consumer Report for the first quarter of 2011 (published in November), Philadelphia’s average domestic fares are around 7% above the national average, although on ‘long-haul’ markets (such as California) the fare premium at the airport is only just over 2%. The same report also reveals that the San Francisco/Oakland to Philadelphia market is the most expensive city-pair in the US with a block distance of over 2400 miles. US Airways has the highest market share but with an average one-way fare of $439. The average one-way fare across all airlines is $371 with Southwest (which flies to Oakland) the cheapest at $246. The Philadelphia to Los Angeles Metro area market has average one-way fares of $312 with US Airways again the leader in market share, but with an average fare of $351.

What they said (about “legacy airline cattle cars”)

“When more airlines compete, consumers win – with lower fares and better service. Travelers deserve more options than just the typical legacy airline cattle car, and we hope our unique brand of low fares and inventive service will be a breath of fresh air for Philadelphians,” said Virgin America President and Chief Executive Officer David Cush. “In addition to being a historic and vibrant city, this market has strong business and leisure travel connections to California – and we thank both Mayor Nutter and Philadelphia International Airport officials for welcoming our new service.”

“This is a great development for the entire Philadelphia region, including northern Delaware, southern New Jersey and southeastern Pennsylvania,” said Philadelphia Mayor Michael A. Nutter. “New airline service not only lowers fares for travelers, but it is also a major economic driver – stimulating business travel, tourism and local job growth. Virgin America’s new flights also validate the strong and growing business travel link between our region’s innovation-based sectors and those on the West Coast.”