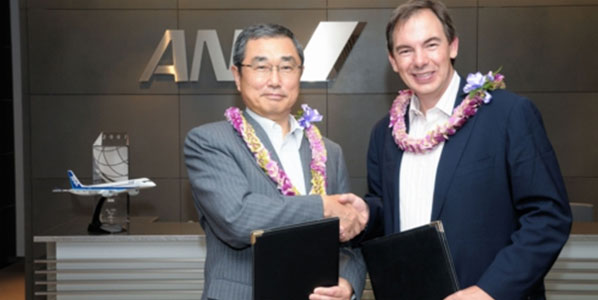 Shinichiro Ito, CEO of ANA, and Mark Dunkerley, CEO of Hawaiian Airlines, just signed a codeshare and FFP partnership agreement between the two airlines. Japan is now Hawaiian’s largest international market, even though the airline only began serving the country in November 2010.

Hawaiian Airlines ranks as the ninth largest airline in the US, if counting United/Continental and Southwest/AirTran as merged airlines. Hawaiian, which features in the opening credits for the relaunched version of the TV series Hawaii Five-0, is thereby the only major US airline to be based in a single state. 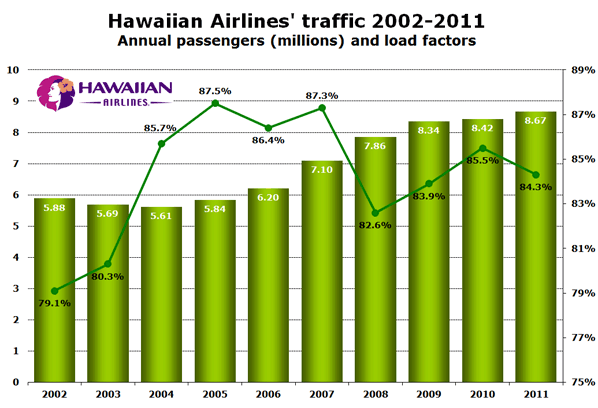 Hawaiian Airlines’ growth has been quite dramatic in the last ten years. From the lowest level in 2004, passenger numbers had increased by 54% last year. The most dramatic – double-digit – growth occurred in 2007 and 2008. The latter year was notably when Hawaiian saw its main competitor Aloha Airlines cease operations.

As the airline has expanded in the last few years, its capacity has grown somewhat faster than the market and load factors have dropped by a few percentage points. 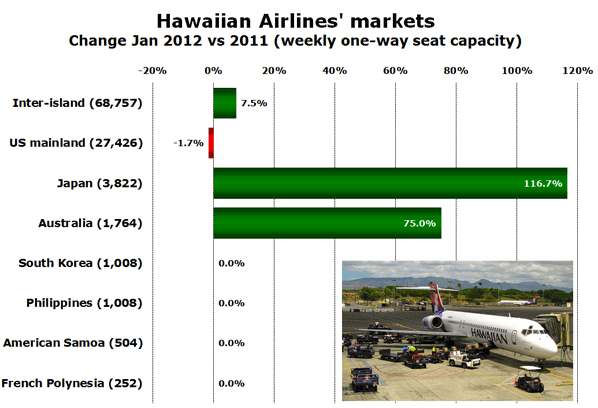 Inter-island traffic within the state of Hawaii heavily dominates the airline’s network, making out 66% of scheduled seat capacity in the current schedule. However, this capacity is split on only seven routes; three from Honolulu on Oahu, three from Kahului on Maui and one between the two.

While traffic to the US mainland, which makes out an additional 26%, has declined somewhat in the last year, capacity to Japan has more than doubled and the airline also offers 75% more seats to Australia this January than last. Japan is now Hawaiian Airlines’ largest international market, even though the airline only began serving the country in November 2010. The reason for the fast growth of this market is largely Hawaiian’s launch in July last year of its second Japanese service after its Tokyo Haneda flights; a route from Honolulu to Osaka Kansai.

Hawaiian Airlines’ international expansion is entirely across the Pacific, with the Canadian market notably missing from the airline’s route map. The carrier is set to establish an even firmer hold of the Japanese market with its new codeshare partnership with All Nippon Airways, which takes effect this week. As part of Hawaiian’s expansion of Maui operations, the airline launched a new service to San Jose in northern California last week – competing with Alaska Airlines. This is the Hawaiian Airlines’ second route to the Silicon Valley airport after its Honolulu operations.

Since the beginning of 2010, Hawaiian Airlines has added six new routes to its network; notably all with its fleet of 767-300 aircraft.

Hawaiian Airlines’ CEO Mark Dunkerley last week revealed the airline’s plans to expand its secondary base at Kahului on Maui to hub status, increasing frequencies and adjusting schedules from the airport both within the state of Hawaii and to the mainland. Except for this week’s launch of San Jose flights and upgrade of Oakland flights from seasonal to year-round, the airline will reintroduce daily flights from the airport to Los Angeles on 21 June, operating during the summer season. The last time Hawaiian operated this route was in 2003.

The airline currently operates 15 717s for inter-island flights, 16 767-300s and 5 A330-200s, but is set to grow further with additional aircraft on order. Four additional 717s are planned to join the fleet, with three expected to be added imminently to support the Maui schedule boost, alongside 16 additional A330s, which eventually will replace the 767s. Hawaiian has also ordered six A350-800s. It has been noted that the aircraft, which are due to be delivered from 2017, even will enable non-stop flights to Europe.