JetBlue was the major US airline that grew the fastest in December, having seen its RPMs increase by 14.3%. The airline was busy expanding its Caribbean operations during the month, launching new routes to the US Virgin Islands from both the US mainland and Puerto Rico.

The latest traffic figures (for December) from the leading US carriers shows that while, for the second month running, three of the four ‘big 4’ global US carriers (which from now on we will refer to as the GUS4 carriers) reported a fall in overall network demand (as measured by RPMs – Revenue Passenger Miles), the country’s low-cost and niche carriers continue to (mostly) report growth ranging from modest (3.1% for Alaska) to impressive (14.3% for JetBlue). Southwest reported its first fall in RPMs in December since April 2010. 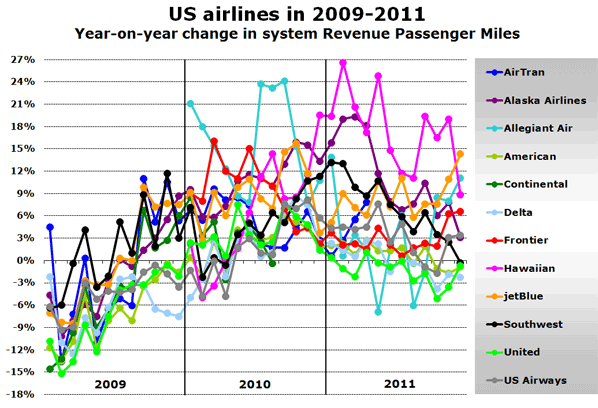 For the first time in 2011, JetBlue was the fastest-growing of the airline’s monitored, followed by Allegiant Air. Meanwhile, for the first time in the year, Hawaiian Airlines’ growth dipped below 10%. Among the GUS4 carriers, there were mixed results for December when demand data (RPMs) was broken down by region.

Seven out of 13 airlines report lower load factors in December 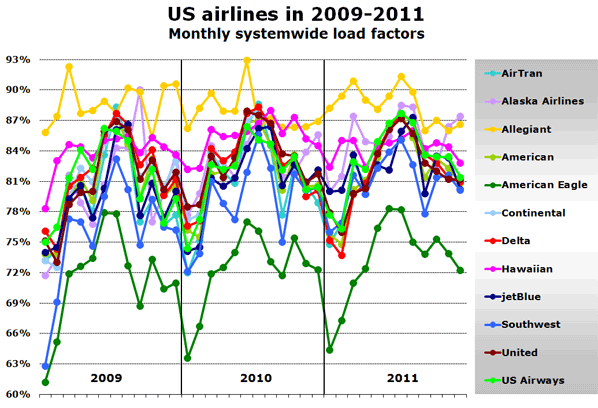