In October last year, Air France received the key to Marseille Provence Airport as the French national carrier established a base at the airport by the Mediterranean Sea. In December, the airline accounted for almost 40% of the airport’s passengers. Although Ryanair has moved its based aircraft away from the airport, the Irish low-cost carrier is again expanding next summer by adding nine routes.

Marseille Provence Airport in the south of France is the fifth busiest in France, handling 7.4 million passengers last year, down 2% on the airport’s busiest ever year in 2010, primarily as a result of Ryanair’s cutbacks, resulting in 24% fewer passengers travelling with the carrier. Recent years have been eventful for the airport with Ryanair establishing a base in November 2006 before reluctantly removing its based aircraft and crews as a result of a dispute with French authorities regarding employment law. Last October, the airport became the first of four French airports to become a regional base for Air France, when the national flag carrier launched 13 new routes, of which 11 were international. 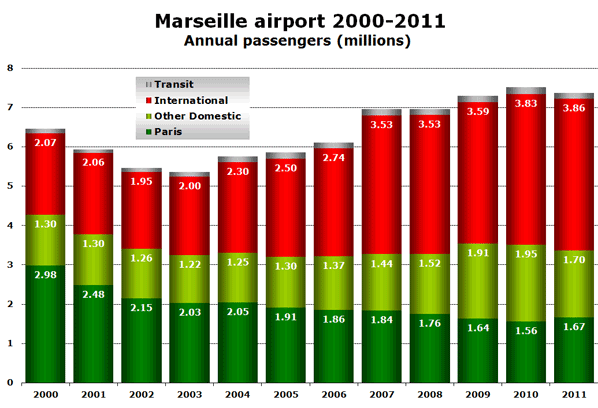 As a result of the new routes, Air France’s passenger numbers at the airport were up 29% in October, 24% in November and 38% in December.

This summer over 30 new routes versus last summer

The airport’s two busiest routes are to the two main airports in Paris, which make up around 23% of total traffic, down from 46% back in 2000. Since then, improvements in the TGV network have made rail a competitive option. However, in 2011, air traffic on both Paris routes rose by around 7%. 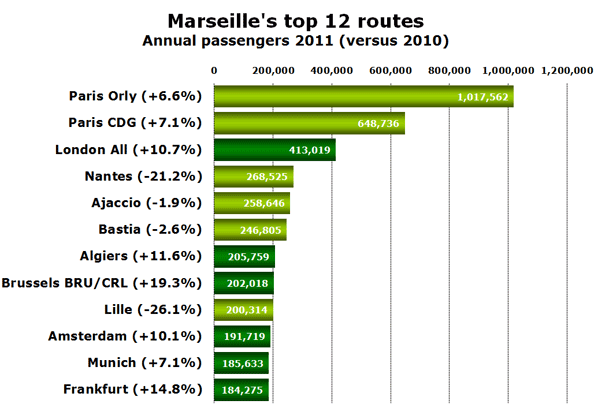 London is by far the biggest international destination with over 400,000 annual passengers, twice as many as on the Algiers and Brussels routes, which each generated just over 200,000 passengers last year.

For this summer, Air France is adding four more new routes (to Barcelona, Hamburg, Marrakech and Venice), while Ryanair is adding back significant capacity with the launch of seven new routes. A summary of the airport’s new services in summer 2012, compared with last summer is provided in the following table.

Passengers wanting to fly to Barcelona, Copenhagen, Marrakech or Milan will be particularly pleased with the increased level of competition, but experience suggests that not all of these services are likely to be on offer come summer 2013. However, as a result of these new developments, the airport is expecting passenger numbers in 2012 to increase by around one million to a record 8.3 million.