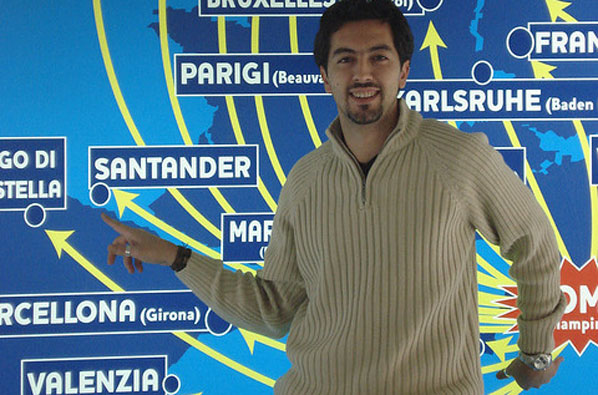 Ryanair’s substantial growth has helped Santander pass the million-mark by operating as many as 15 routes last summer – although, like a number of airports that benefit in this way, Santander is not a Ryanair base (we’ve no idea who the guy in the photo is, but we’re very grateful to him for illustrating this point by higlighting Ryanair’s Santander service from its Rome Ciampino base).

According to the latest traffic data published by AENA, Santander airport in northern Spain can justifiably claim to be Spain’s fastest-growing airport in 2011, with passenger numbers up 21.4% (the average across all Spanish airports was 6.0%) to 1.12 million, the first time the airport has handled over one million passengers in a year.

The driver of this growth is the on-going increase in Ryanair services. The Irish LCC began serving the airport in September 2004 from London Stansted and Rome Ciampino, and last summer operated a total of 15 routes. 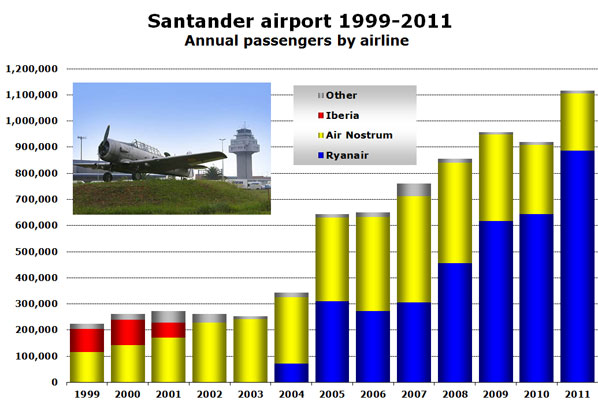 The 38% increase in Ryanair’s passenger numbers in 2011 can be explained by the launch of new routes in 2010 to Barcelona, Malaga, Paris Beauvais and Pisa, and in 2011 to Gran Canaria, Lanzarote, Seville and Tenerife Sur.

Previously served destinations include Liverpool and Weeze, while Reus and Alicante flights ceased at the end of last summer. Seasonal Dublin flights resume at the end of March while a new destination, Palma de Mallorca, begins on 21 March.

Barcelona and Madrid routes account for nearly half of all traffic

Just two destinations, Barcelona and Madrid, account for over 45% of all passengers at the airport, with many of these likely to be making connections in Madrid. Ryanair’s two oldest routes, London and Rome are the leading international destinations. 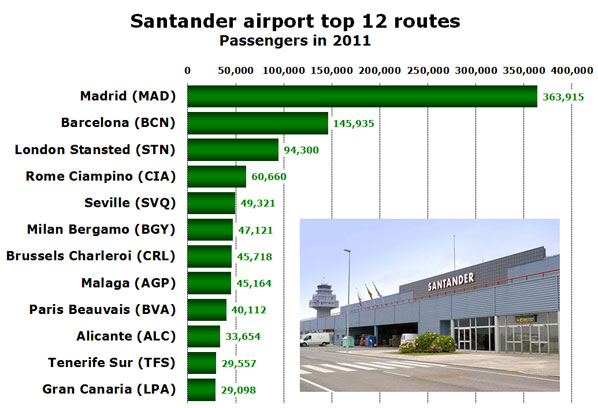 Santander is around 75 kilometres west of Bilbao, an airport that Ryanair does not currently serve, and which saw passenger numbers grow by 4% to just over four million in 2011. Across Europe the name Santander is increasingly synonymous with banking, as the Santander Group is now apparently the biggest bank in the Eurozone and is a main sponsor of the Ferrari F1 team, a corporate partner of the McLaren F1 team, and is the title sponsor of this year’s British, German, Italian and Spanish F1 Grand Prix races. The bank (which has grown through mergers and acquisitions) was founded in the city in 1857.