January 11 – the latest cross straight routes are launched by Hainan Airlines with services to Taipei from Lanzhou (Gansu Province) and Sanya (Hainan Island). Monthly traffic has risen 10-fold since direct services were opened up in 2008 and will exceed 500,000 one-way seats for the first time in January.

Since our previous analysis of the Taiwanese air transport market, the most significant development has been the on-going opening up of direct air services between Taiwan and Mainland China, often referred to as “cross-strait” traffic. Back in late November 2008, this market was less than 50,000 one-way seats per month. This January, according to OAG data, this market will exceed 500,000 one-way seats for the first time. 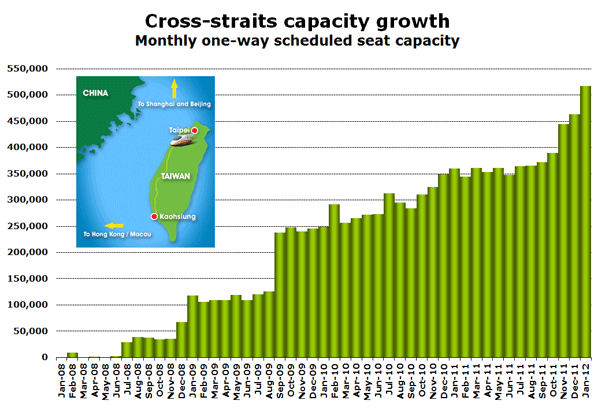 Analysis of OAG data suggests that the cross-straits scheduled market has grown from zero in 2007 to around nine million annual seats in 2011.

Of the 15 carriers currently offering scheduled services between Taiwan and Mainland China, six are based in Taiwan (shown in light green), and account for just under 55% of the total market. 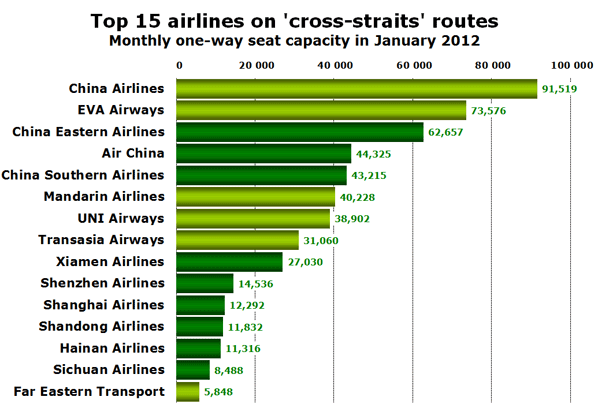 Of the top 20 airport-pairs, 18 involve Taipei Taoyuan Airport on the Taiwanese side of the route. The busiest route is from Taipei Taoyuan to Shanghai Pudong Airport, with almost 80,000 monthly one-way seats. This is more than twice as much capacity as is currently provided on the Beijing – Taipei and Shenzhen – Taipei routes. 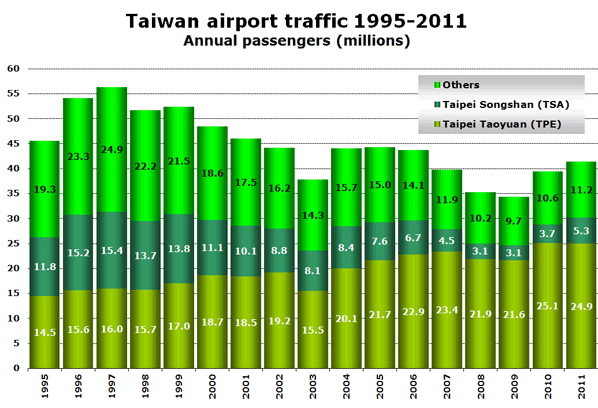 However, this is well below the record set back in 1997 of over 56 million airport passengers. Since then passenger numbers have fallen as a result of improved domestic rail services, which saw domestic demand drop from around 18 million passengers in 1997 to just one-third that number a decade later. The opening of high-speed rail links in 2007-08 has further eroded domestic traffic.

Apart from routes to Mainland China and other new regional routes to Hong Kong and Japan, Taiwan’s two major airlines have also each started a couple of long-haul routes in recent years. At the start of the 2010 summer season, China Airlines launched non-stop flights to London Heathrow, but after two years of operation these twice-weekly flights appear to be ending this March. The carrier also introduced flights last November to Auckland in New Zealand, via Brisbane in Australia.