If we’re not mistaken, anna.aero has calculated that fast-growing Vueling should be carrying its 50-millionth passenger any time now. We also apologise in case of any unintentional confusion over the age of Vueling’s eternally-youthful CEO, Alex Cruz. He is, of course, only 43.

In 2011, Barcelona-based Vueling carried 12.3 million passengers (up 11.6% on the previous year) on a fleet of 40-plus A320s. This leaves it in fourth place among European LCCs behind Ryanair, easyJet and Norwegian, but (just) ahead of Pegasus and Wizz Air, both of which reported higher growth rates in 2011. The average load factor also improved last year, from 73.2% in 2010 to 75.6%. 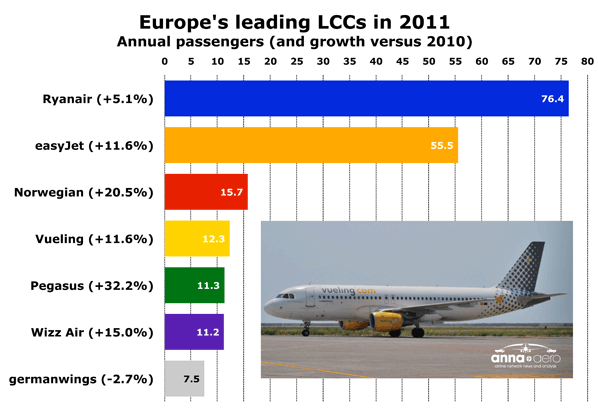 The airline’s main centre of operations is Barcelona’s El Prat airport from where, unlike its low-cost rivals, it operates from the impressive new terminal which opened in 2009. Barcelona is also possibly the only airport in Europe served by all seven of Europe’s leading LCCs. According to AENA statistics Vueling was by far the biggest carrier at the airport handling almost 7.8 million of the airport’s 34.3 million passengers, giving it a market share of around 23%. Spanair (4.3 million), Ryanair (3.4 million) and easyJet (2.4 million) were the next biggest carriers at the airport.

Barcelona based fleet to grow from 23 to 28 aircraft

Vueling recently confirmed that this summer its Barcelona based fleet will grow by five aircraft, from 23 to 28 aircraft, representing capacity growth of around 20%. It will also include an A319 to complement the existing A320s. The number of destinations served non-stop will rise from 47 to 70, with the launch of over 20 new routes. A summary of the new routes is provided in the following table.

A couple of destinations served last summer (Ciudad Real and Jerez) have been dropped for this summer. New routes on which Vueling will face direct competition from other carriers include Copenhagen, Edinburgh, Lanzarote, Lyon, Marseille, Munich, Nice, Stavanger and Stockholm. The Almeria and San Sebastian services will replace existing Iberia Regional flights. 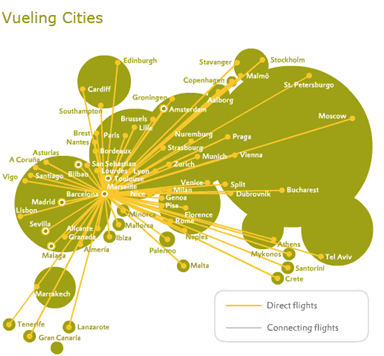 While the airline is keen to promote the fact that its route network and the number of flights offered will also be growing at other airports such as Bilbao and Paris Orly, what it chooses not to mention is the reduction in flights elsewhere. Last summer Vueling operated flights from Madrid (some on behalf of Iberia) to 14 destinations. This summer the number of destinations served non-stop has been cut back to just seven of which one (Florence) is actually a new destination. Iberia’s plans to start its own low-cost carrier from Madrid this year (named Iberia Express) has resulted in industrial action from flight crews affecting Iberia’s main hub operations this month. Whether these issues can be resolved remains to be seen, but Vueling (which is part-owned by Iberia) is now clearly focussing its future growth at Barcelona.

Vueling’s decision last year to operate a network of flights from Toulouse in France appears not to have been a huge success. After launching with eight routes last April, three routes were dropped for winter (and one, Lille, was added), while during this summer’s peak period (July onwards) just four destinations will be served non-stop, with Nice ending in March, and Lille and Venice not currently bookable beyond June.