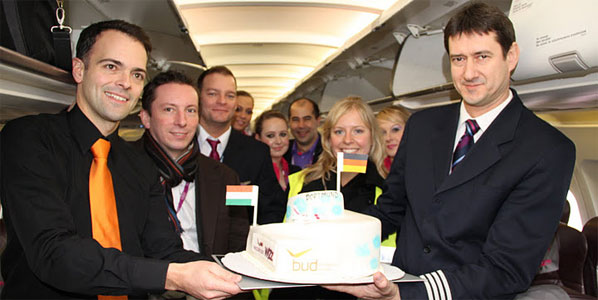 Dortmund is the latest destination offered by Wizz Air out of its Budapest base at the expense of its Weeze route. This summer, the low-cost airline will operate to 23 destinations from the Hungarian capital, using four of its 180-seat A320s.

Despite being headquartered in Budapest, Wizz Air’s first operational base in May 2004 was at Katowice Airport in Poland. Budapest operations began the following month. During that first summer, 11 destinations were launched from the airport, of which just six are still operated today. In the following years, Wizz Air has, at one time or other, served over 40 destinations from the Hungarian capital, but never more than 23 in any one season. Last week saw the launch of services to Dortmund in Germany (competing directly with easyJet), although at the same time, twice-weekly flights to Weeze (also in Germany) were terminated. Prior to Weeze, the last route to be dropped by Wizz Air from Budapest was Istanbul Sabiha Gökçen, which was launched in December 2010 but was suspended last June. 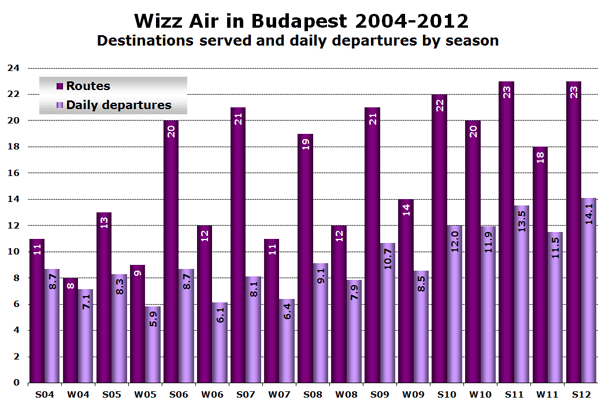 This summer, Wizz Air will have four A320s based at Budapest, operating non-stop to 23 destinations across Europe, although only four of these destinations receive daily flights (Brussels Charleroi, Eindhoven, London Luton and Milan Bergamo). The average weekly frequency across all routes is just over four flights per week.

Other destinations that have been tried and have failed to deliver acceptable results include Amsterdam, Athens, Bucharest, Cluj Napoca, Girona, Katowice, Liverpool, Oslo Torp, Paris Beauvais, Prague, Sofia, Split, Varna, Venice Treviso and Warsaw. A high proportion of these unsuccessful routes are to other destinations in Central Europe, clearly demonstrating the difficulty of making low-cost routes within Central Europe work, something that SkyEurope also discovered several years ago.

According to OAG data for July 2012, Malev still accounts for around 45% of scheduled seat capacity at Budapest airport, operates over 500 departures per week, and serves over 50 destinations with non-stop services. Wizz Air is second with around 13% of seat capacity and around 100 weekly departures. If troubled Malev were to cease operations, Wizz Air would find it difficult to take up much of the slack without re-allocating aircraft from elsewhere in its network.