Chengdu rises to #5 in Mainland China as Etihad arrives In spite of being Mainland China’s fifth-largest airport, Chengdu only has one intercontinental service on KLM. As of last month, Etihad exploits this underserved long-haul market, having launched flights to the home of the Great Panda from its Abu Dhabi hub.

As Chinese communities across world currently celebrate the Lunar New Year, air travel booms in an already expansive region. Meanwhile, Chengdu Shuangliu International Airport has climbed to fifth place in the rankings of Mainland China’s largest airports by passenger throughput for the last year, falling behind only Beijing, Guangzhou and the two Shanghai airports; but now also ranking ahead of Shenzhen. 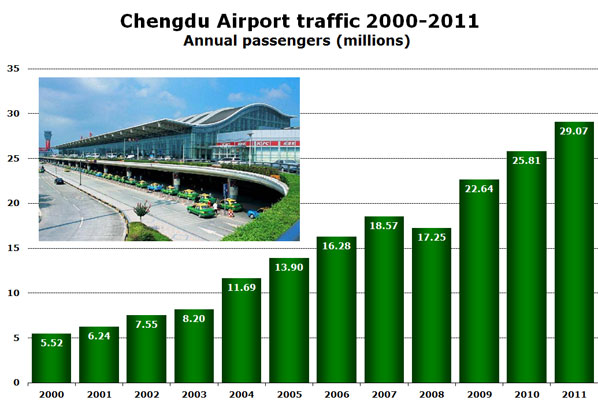 The airport, which serves the capital of Sichuan Province in Southwest China – known as the home of the Giant Panda, last year served over 29 million passengers. The only fall in passenger traffic occurred in 2008, when an earthquake hit the city and its surrounding area. The only other year in the last 12 years that growth was lower than double-digit was in 2003 when SARS affected travel demand in the region. However, the year after – 2004 – growth was record-high; +43%. Also in 2009, after the earthquake, the market showed itself able to bounce back and grew by 31%. 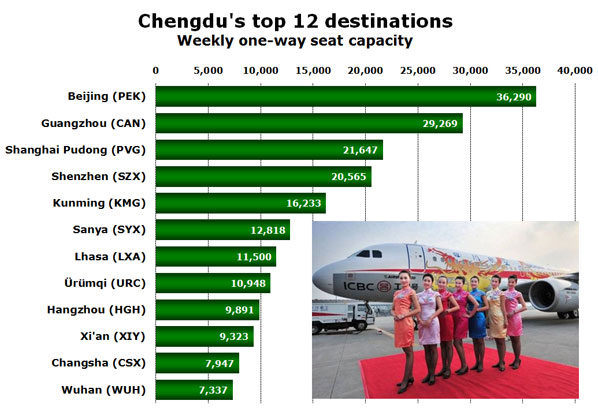 93% of seat capacity offered out of Chengdu is on flights within Mainland China and the airport’s top routes are all domestic. The busy Beijing route, which is served with over 36,000 weekly one-way seats (which translates to over 5,000 seats a day or nearly 1.9 million seats annually), has five airlines competing, but almost 85% of capacity is offered by only Air China and Sichuan Airlines.

Notable airports among Chengdu’s top domestic destinations are Lhasa in Tibet and Ürümqi in Xinjiang. Due to its geographical location in the west of China, Chengdu has for long functioned as a gateway to Tibet and the Western Regions.

Hong Kong is the biggest ‘international’ market at 6,100 weekly one-way seats. It is followed by Thailand and Taiwan in second and third place respectively. The only intercontinental route to Chengdu is KLM’s twice-weekly service from Amsterdam, which has operated since 2006. Etihad, which began serving Chengdu four times weekly from its Abu Dhabi hub as recently as last month, also wishes to tap European passenger flows, alongside traffic to and from the Middle East and Africa. 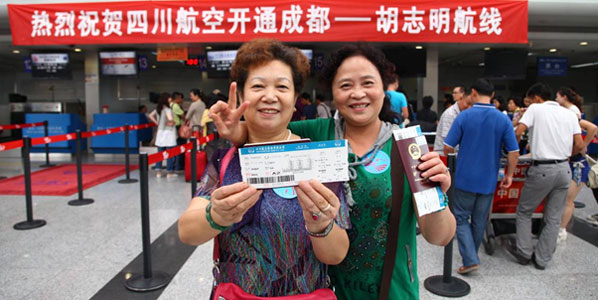 Although the national carrier Air China is the largest airline in Chengdu, locally based Sichuan Airlines is a clear second in the market. Last September, the airline launched flights to Ho Chi Minh City in Vietnam, operating via Nanning.

Air China and locally based Sichuan Airlines dominate traffic in Chengdu. Other than the major, national carriers, the smaller local airline Chengdu Airlines is notably the airport’s sixth-largest and Tibet Airlines, which only launched operations last year, already ranks #9 thanks to operating scissor-hub-like operations in Chengdu.

According to anna.aero’s database of new routes, Chengdu has seen 17 new routes launch in the last year. However, while we take pride in the quality of our database, there may be gaps in particular in the Chinese domestic market, making the following list incomplete. At present, we have no record of any further routes having been announced.