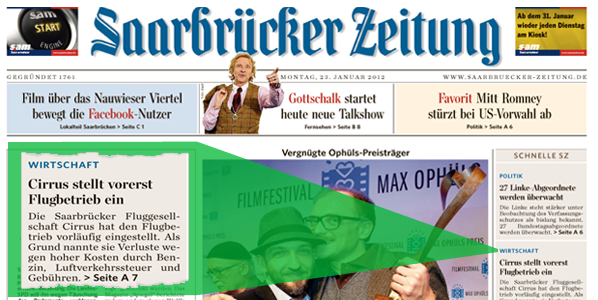 Cirrus Airlines’ local newspaper Saarbrücker Zeitung reports on the suspension of operations. The most routes will be lost from Dresden, while Hof-Plauen loses its only scheduled commercial service.

The latest victim of high fuel prices and a weakened economy in combination with the German aviation tax is that the German regional airline Cirrus Airlines ceased operations at the end of last week and has filed for bankruptcy. The airline, headquartered in Saarbrücken on the German border to France, has now grounded its fleet of nine Do328 aircraft and an E-170.

At the end of last year’s winter season, the airline’s agreement with Lufthansa ended. As a consequence, Cirrus dropped the two routes it had operated on the airline’s behalf; to Frankfurt from Münster/Osnabrück and Friedrichshafen. Since then, the airline’s sole E-170, which was used for those routes, has been left for charter operations, while the 30-seat Do328s have operated the airline’s own network of regional niche services in the three German-speaking countries Germany, Austria and Switzerland.

Already last month, Cirrus dropped two of its routes; from Mannheim to Berlin Tegel, which was the airline’s highest frequency route at 18 weekly rotations, and from Erfurt to Munich, which was operated with 13 flights a week.

The following table summarises Cirrus Airlines’ network at the time operations were suspended (according to OAG).

The greatest effect will be felt at Hof-Plauen, which like Mannheim in December is left without scheduled commercial services after Cirrus Airlines’ departure. The effect is also great on Dresden, which loses three routes.