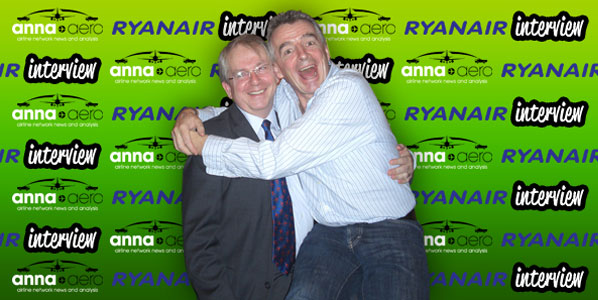 The interview: We met on Ryanair’s terms – unsurprisingly there was only one chair. The meeting in Budapest was not without meaning as the gist of O’Leary’s message was ‘we’ve been busy in Spain and Italy now we’re going after Central Europe.’

At the invitation of Budapest Airport, anna.aero attended yesterday’s announcement of five new routes marking Ryanair’s return to the city after an 18-month absence. The Ryanair CEO agreed to meet anna.aero for a rare business press interview just prior to the event…

anna.aero: In recent times, Budapest Airport has indicated that they and you “agreed to disagree” on airport charges. What’s changed?

MOL: We disagree less on charges. When we pulled out 18 months ago, it was because the costs were too high and then they increased the ATC costs. We’ve come to an agreement. We still think the costs are too high, but they’re somewhat more modest than they were 18 months ago and that allows us to open five new routes. If you look at the frequencies we’re offering this summer, four times weekly on London Stansted, twice weekly on Birmingham, Bologna, Bristol and Dublin, it’s not huge capacity. We’ve got an improved offer on costs and facilities. It’s still not fantastic, but I think it allows us to put a toe in the water here during the summer, show them what they’re missing, and hopefully they’ll respond and come back with further incentives. What we’re looking for is for them to incentivise us to grow rapidly, because let’s face it, in a city where you’re dependent on Malév, we can deliver an awful lot of growth. 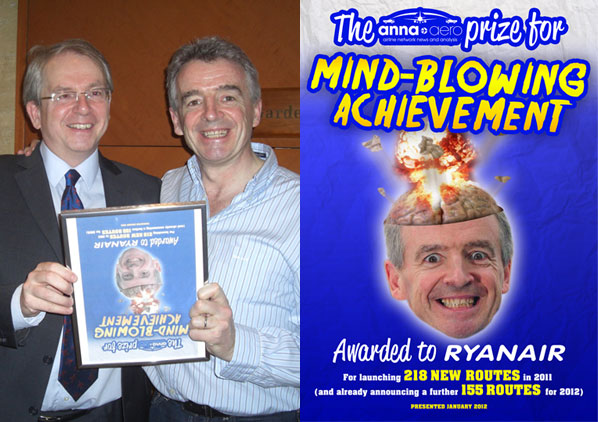 MOL receives the “anna.aero Prize for Mind-Blowing Achievement” for launching 218 routes in 2011 – and for already announcing 155 for 2012 – this has gone up to 160 after yesterday’s announcement in Budapest. In accepting the award, O’Leary was characteristically overcome with emotion: “I don’t care if we’re award-winning or not – I’ll hold it upside down to make it more interesting.”

anna.aero: Another Central European airport you identified last year as a future base was Modlin, the new low-cost airport which should open this summer to serve the Warsaw catchment area. Last year, you expected it to become your 48th base, but since then you have announced three other new bases (Palma, Billund and most recently Paphos). What’s happening with Modlin?

MOL: We’re still talking. We haven’t got to where we’d like to get on costs. We’ll certainly be announcing something for when they open, which looks like it will be July, but whether it becomes a base I’m not sure. There is still work to do on the cost base.

anna.aero: With a return to Budapest, a new base in Poland (Wroclaw), a significant presence in Bratislava, are you targeting Wizz Air’s markets?

MOL: Not per se. If you go back about four years and look at our development, we were going to move into Central and Eastern Europe and then Italy and Spain opened up as Alitalia and Iberia began to implode and then our whole strategy switched because we just got phenomenal opportunities to be in Italy and Spain. So for the last three or four years we’ve been opening up huge numbers of bases in these countries, and growing the traffic hugely. We now have around 30 million passengers in Spain and are the number one airline in Spain and Italy. We’re still growing there but we’ve grabbed the land, if you like, in Spain and Italy and now it’s time to take that growth into Central and Eastern Europe and so we have our first base in the Baltic states (Kaunas in Lithuania), our first base in Poland (Wroclaw), and this development in Hungary. Are we going after Wizz? Wizz are too small to go after, it’s like kicking a child out of the way. As we expand, what’s happening now is, we’ve been in discussion with all these Central European airports for the last three or four years and saying to them, wait, wait, we were a bit busy in Spain and Italy, but now we’re ready to go and we have all these deals done and we’re starting to announce them. So I think if we’re going after anybody, we’re really going after all those airlines who for the last number of years have been having a holiday from competition in Central Europe. LOT, Malév, airBaltic, Wizz, easyJet to an extent. 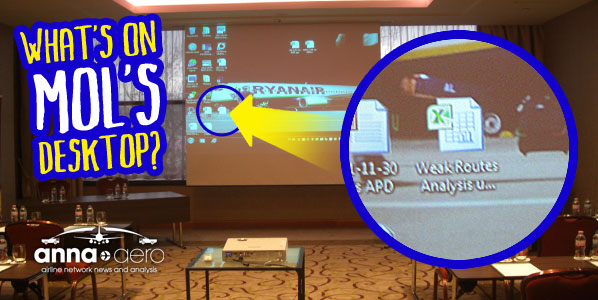 Here’s a spreadsheet you don’t want to be on: MOL left his desktop on display before the start of the Budapest press conference complete with his “Weak Routes Analysis”. Nice.

anna.aero: Despite starting over 150 new routes in 2012 you’re only expecting to grow passenger numbers by around 5% this year. Is it safe to assume that there will be some culling of underperforming routes as well? 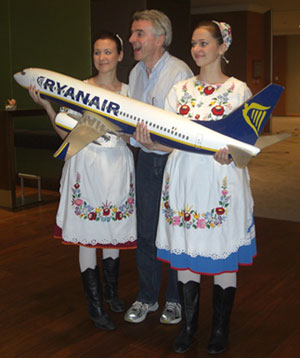 Winning hearts and minds: “We're going after all those airlines who have been having a holiday from competition in Central Europe: LOT, Malév, airBaltic, Wizz…easyJet to an extent.”

MOL: Yes, absolutely, but remember the reason we’ve slowed down the growth a lot is that we’ve sat 80 aircraft on the ground this winter. The issue for us was the sudden surge in fuel prices. Last year, we were hedged at around $80 per barrel for the first three quarters (of the financial year), but for the current quarter we’re hedged at around $120 per barrel, so if you take that big step up in fuel costs in the worst quarter of the year, we would bleed money out of every orifice, and we don’t want to do that. The great thing about our model is that we’re so flexible we CAN sit up to 80 aircraft on the ground and give people holidays, unpaid leave, whatever needs to be done, but NOT lose a bundle of money. The key thing is growth will continue. We’re taking delivery of 30 aircraft from Boeing in calendar 2012, which takes the fleet to 300. I think we’ll be parking less aircraft on the ground next winter, partly because fuel will be smoother, and we’ll have had another year to get our average fares to rise across Europe. The key is fuel price volatility. If fuel prices jump very sharply, airlines take it up the a**e, because you can’t suddenly adjust fares up very quickly. Whereas if it rises slowly, generally speaking all airlines can raise fares slowly over a period, and obviously if it falls very quickly, we all make out like pandas (we think that’s what he said), and everyone starts slashing fares.

anna.aero: So what’s your overall view of the year ahead?

MOL: The big trend for us this year is that so many other airlines are cutting capacity. Lufthansa are cutting capacity, Air France are going to cut capacity, Alitalia are going to cut capacity, Iberia, when they’re not on strike, are going to be cutting capacity. So there’s still lots of opportunities, easyJet are still fighting Stelios. I’d say by the time he gets finished, gets paid another dividend, they’ll be cancelling aircraft deliveries, so we’re still the only one I can see across Europe still consistently taking aircraft and growing the business, which is why so many airports who 18 months ago were fighting with us on costs are now back, kissing and making up.

To read more about Ryanair’s developments, see this week’s report from Budapest: