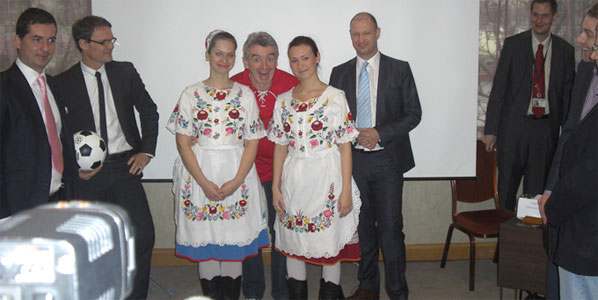 “We disagree less on charges” – the Ryanair and Budpaest Airport CEOs, Michael O’Leary and Jost Lammers. Very significantly the Ryanair boss stressed that the key to the new routes is inbound tourism – a change from the early days of Hungary’s EU membership when low cost airlines were largely patronised by a newly-mobile labour force.

After an 18-month hiatus, Ryanair has announced that it will be returning to Hungary this summer, with the introduction of five routes to Budapest. London Stansted will be served four times weekly, while Birmingham, Bologna, Bristol and Dublin will each get two weekly flights. Both the Bristol and Dublin routes were operated when Ryanair first started serving the Hungarian capital back in late 2007. At that time, apart from those two routes, the carrier also served East Midlands, Glasgow Prestwick and Liverpool in the UK, as well as Bremen and Frankfurt Hahn in Germany. The five new routes are expected to deliver around 200,000 passengers per annum and sustain 200 local jobs.

Direct competition will be provided by Aer Lingus and Malév on the Dublin route. Ryanair has chosen not to target any Wizz Air markets directly, but its London Stansted service will offer an alternative to Wizz Air’s three daily flights from London Luton, as well as easyJet and Malév at London Gatwick, and British Airways from London Heathrow. 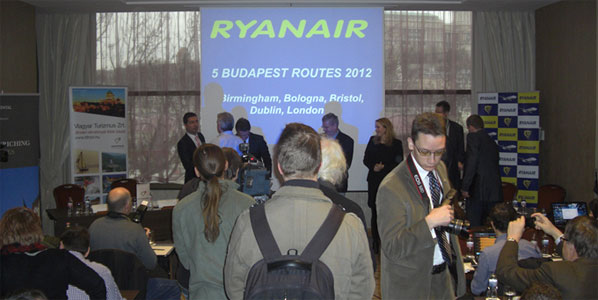 The five Budapest routes – three to the UK – a 1m market growing around 10% pa. Direct competition with Wizz is largely avoided – unsurprisingly troubled Malév has most to lose, especially on the Dublin route.

During Michael O’Leary’s press conference in Budapest, it was stressed that the key to the markets was inbound tourism. Being outside the Eurozone, Hungary currently offers good value for money for visiting tourists, which possibly explains the focus on routes to the UK. 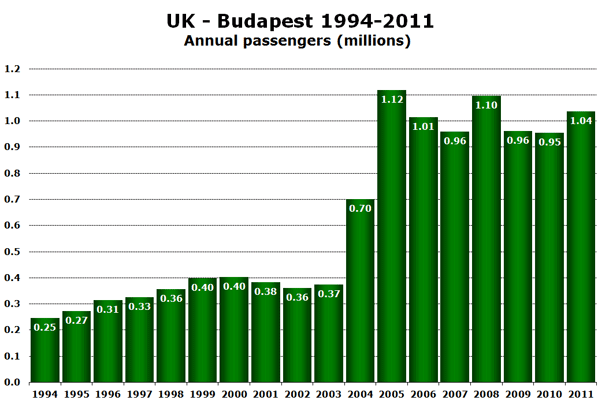 After joining the EU in 2004, and thus enabling any EU carrier to serve the country, the UK – Hungary market grew rapidly, trebling in just two years from 370,000 passengers in 2003 to 1.12 million in 2005. Since then annual passenger numbers have hovered around the one million mark. Last year saw the market grow by almost 9% but the 1.04 million passengers handled is still below the record of 2005.

[We would like to gratefully acknowledge the help and hospitality of Budapest Airport in the preparation of this edition of anna.aero. Both this article, and the Michael O’Leary interview, were written in the departure lounge by anna.aero editor Ralph Anker and wired back with the message: “Wow – SkyCourt is nice. I’m impressed (again). I really must get back to see Budapest when it’s sunny!”]

To learn more about Ryanair, see this week’s top story: