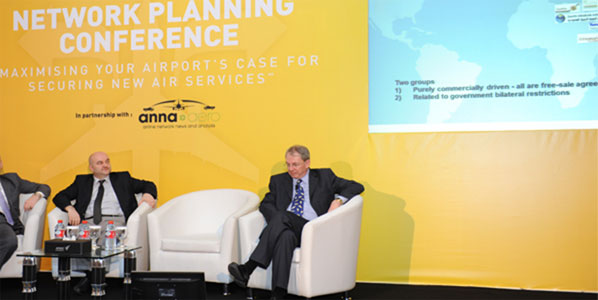 Turkish Airlines is unsurprisingly a big driver of its country’s growth launching 20 new routes from Istanbul in 2011. For a detailed briefing on THY you can download the presentation made by Soner Akkurt, THY’s acting Chief Commercial Officer (seated left), at the anna.aero/ACI EUROPE Network Planning Conference hosted by Abu Dhabi Airport in December.

The country’s main travel hub at Istanbul Atatürk Airport saw passenger numbers rise by 16.5% last year to almost 37.5 million, while the city’s second airport, Sabiha Gökçen, reported growth of almost 14%, resulting in some 12.8 million passengers. Izmir overtook Ankara as the country’s fourth busiest airport while only one of the country’s top 12 airports, Dalaman, saw a fall in demand compared to 2010. 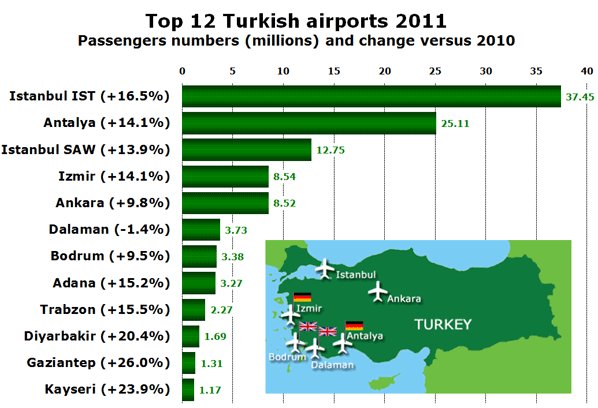 The country’s two major airlines were, not surprisingly, key drivers of this traffic growth. Turkish Airlines (a Star Alliance member) launched 20 new routes from Istanbul in 2011 and saw passenger numbers grow by 12.1% to 32.6 million, as capacity (measured in ASKs) surged by almost 25% on a fleet of 179 aircraft. Low-cost rival Pegasus (based at Sabiha Gökçen) has reported passenger growth of 32.2% to 11.3 million in 2011, making it Europe’s fifth biggest LCC after Ryanair, easyJet, Norwegian and Vueling.

New routes at Turkish airports already announced for 2012 include the following: