Spanair collapse good for the routes of Vueling, Air Europa and Iberia, bad for Star Alliance 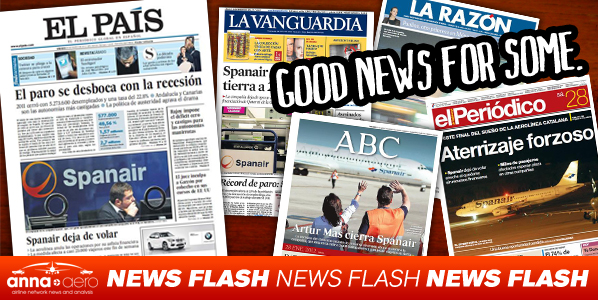 Vueling is the biggest beneficiary of Spanair’s collapse. The Barcelona-based airline had already announced routes to start later this year that targeted key Spanair markets, especially in Scandinavia.

So who gains from the demise of the Spanish-based Star Alliance member Spanair? The airline was not that long ago the second-largest at both Madrid and Barcelona airports. However, in just a few years, Spanair’s reduced operations from Madrid had seen it slide from second to sixth place, while at Barcelona, its passenger numbers grew by almost 7% last year and it remained the second-biggest carrier behind Vueling.

Vueling and more recently Ryanair have been exerting considerable pressure on the airline’s Barcelona network. Vueling was already competing head-to-head with Spanair on all bar one of its 16 domestic routes from Barcelona, and among its raft of recently announced new international routes from the airport were services to Copenhagen, Marseille, Munich, Nice and Stockholm, all of which were served by Spanair. 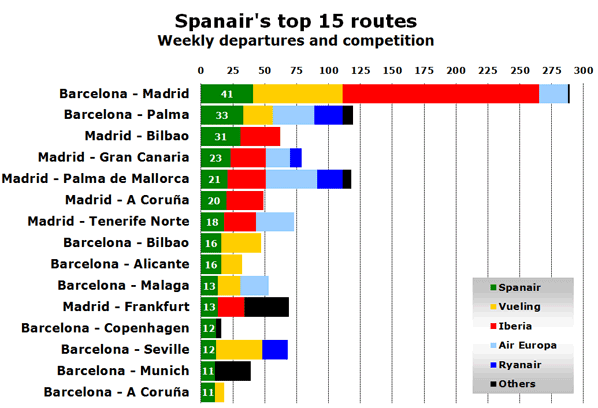 Spanair’s top 15 routes this winter, operated predominantly with 19 A320s and five A321s, were shared between Barcelona (nine routes) and Madrid (six routes). On the airline’s Madrid routes, competition came mostly from Air Europa and Iberia, while Vueling was the key competitor on most of the airline’s Barcelona routes.

54 routes this winter; almost 80% of capacity on domestic services

A total of 22 routes were international, although these only accounted for just over 20% of weekly seat capacity. Only seven of these routes were served with more than three weekly frequencies and five of these involved Star Alliance hubs (Madrid to Copenhagen and Frankfurt, and Barcelona to Copenhagen, Munich and Stockholm). Barcelona to Berlin Tegel can almost be counted as a hub route now that Lufthansa is expanding there, leaving just Barcelona-Algiers as a significant niche route. Destinations served with three or fewer weekly flights this winter include Bamako (in Mali), Banjul (Gambia), Belgrade, Hamburg, Helsinki, Nador (Morocco), and Tel Aviv.

Several airlines have quickly responded to the plight of stranded passengers by operating additional frequencies. Vueling has gone one step further and operates to Copenhagen and Stockholm from Barcelona today, Monday 30 January, and on Friday 3 February, even though these two routes are not scheduled to start full-time until 25 March.

The demise of Spanair leaves Star Alliance much weaker in Spain. Iberia (and soon airberlin) belong to oneworld, while Air Europa is a SkyTeam member. Much of the other capacity is shared between non-aligned low-cost carriers such as easyJet, Ryanair and Vueling, leaving Lufthansa as the biggest Star Alliance carrier now operating in Spain.