Avianca’s latest destination: Domestic flights to Florencia were launched last week from the airline’s Bogotá hub, but it is international traffic that is growing the fastest. With major aircraft orders, including both 787s and A350s, the airline is also set to grow its intercontinental network and exploit the Star Alliance feeder network.

In 2011, AviancaTACA transported 20,751,261 passengers; an increase of nearly 18% on 2010. While the separate airline brands are expected to be merged later this year, just over half of the seats offered by the company are currently on Avianca, the Colombian airline based at Bogotá’s El Dorado International Airport.

Avianca also dominates the international market out of Bogotá. The airline has a 45% share of the airport’s international capacity, followed by Copa Airlines at only 11%. 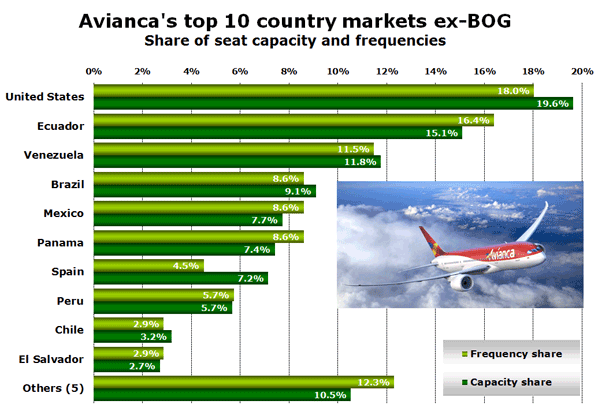 In Avianca’s international network, the Venezuelan country market is growing the fastest. Although the airline hasn’t launched any new routes to the country and operates only marginally more frequencies than last year, seat capacity is up by 57% on last January as a result of aircraft upsizing on the both Venezuelan routes; to Caracas and Valencia.

In the US, Avianca serves five airports; Miami, New York JFK, Washington Dulles, Fort Lauderdale and Orlando. In January last year, the airline dropped its Los Angeles route, but this was compensated for in July when the Orlando route launched.

The only country market served by Avianca outside of the Americas is Spain. From Bogotá, the airline operates daily to Madrid and four times weekly to Barcelona, but Madrid is notably also served from two regional Colombian airports. From Cali in the west of the country, the airline operates six times a week to the Spanish capital and twice-weekly from Medellín in the north.

As detailed in the table above, Avianca launched three new routes in 2011, all international, and one route so far this year, which is a domestic service. All four routes are from the airline’s main Bogotá hub.

Although no further routes have yet been announced, AviancaTACA has large aircraft orders with as many as 51 Airbus units ordered last week; 33 A320neo family and 18 A320 family aircraft. However, it is unknown how big of a share of this new order is destined for Avianca’s Colombian operations.

Avianca’s current fleet (according to ch-aviation.ch) consists of 44 A320 family aircraft; 10 A318s, nine A319s and 25 A320s. For longer and higher-capacity routes, the airline operates seven A330-200s ahead of the delivery of its ordered 787s, while for regional operations, Avianca currently operates 10 F50s.

In addition to the latest Airbus order made by the parent company, the Colombian carrier already had orders for two A319s and 12 A320s. Avianca will also take delivery of three further A330s as the airline phases in its 12 787-8s on order. In addition to these 787s, Avianca has ordered 10 A350-900s, clearly indicating great long-haul growth ambitions as the airline makes use of its upcoming Star Alliance membership. Since the alliance, which Avianca is expected to join in May, just has lost its Spanish member Spanair, the Colombian airline may now wish to connect its network with the hub of a European alliance partner.