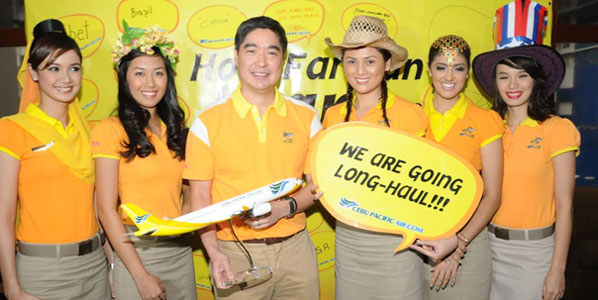 Cebu Pacific’s President and CEO Lance Gokongwei celebrates the wide-body aircraft announcement with his crew. Next year, the airline will start using A330-200s to establish long-haul low-cost routes to Europe, the Middle East, Oceania and the USA.

The Asia-Pacific region appears to be where low-cost long-haul traffic will boom in the near future. In addition to existing operators AirAsia X and Jetstar, Singapore Airlines has announced its low-cost venture Scoot and Norwegian, albeit a European carrier, has announced it will base its 787s in Bangkok and Beijing from where it will serve Europe.

The latest announcement comes from Cebu Pacific, which already ranks as the Philippines’ largest domestic airline and second-largest in the international market. Its fleet of A320 family aircraft and ATR72s are to be complemented by up to eight leased A330-200s, which will begin joining the fleet from the third quarter next year.

Lance Gokongwei, Cebu Pacific’s President and CEO, explained: “We are exploring serving cities where large Filipino communities reside – Europe, Middle East, Oceania and the USA. Data indicates that more than half of Filipinos deployed in these regions take multiple stops and connecting flights because no home carrier can fly them there non-stop.”

Currently, only one European airport and two airports in the US mainland have non-stop connections with the Philippines; Amsterdam in Europe and San Francisco and Los Angeles in the US. Cebu Pacific also points at Saudi Arabia as an example of the long-haul market being underserved. Citing Civil Aeronautics Board (Philippines) 2010 data, the airline highlights how 44% of the nearly 300,000 passengers between the Philippines and Saudi Arabia transferred en-route instead of flying non-stop.