Here’s something you won’t see anywhere else: Wizz Air’s rotation plans for Modlin (moving from Warsaw in July) Wizz Air has become the first airline to confirm that it will operate from the new Warsaw Modlin Airport when it opens later this year. The Budapest-based carrier will shift all of its capacity (and four A320s) from Warsaw Chopin Airport to Modlin from 18 July. A total of 19 destinations will be served across 10 countries with 90 weekly departures.

The United Kingdom is the leading country market with 32 weekly departures followed by Italy and Sweden both with 13. All of these routes will also be served by Wizz Air from Warsaw Chopin airport this summer, until 18 July. The newest addition to the network is Stavanger. Flights to the Norwegian city will begin on 27 March.

No flights scheduled to return after 23:00 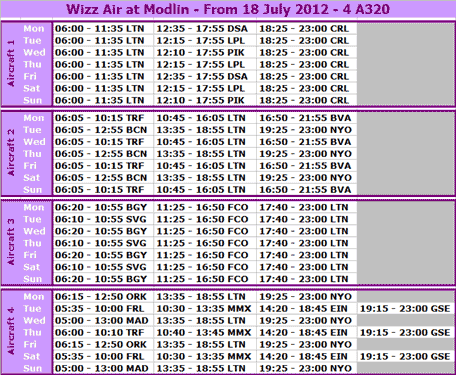 A close examination of the airline’s planned schedule for its four Modlin based aircraft reveals that each aircraft operates three return flights every day, with the exception of one aircraft which manages four return flights (to Forli, Malmo, Eindhoven and Gothenburg) on Tuesdays, Thursdays and Saturdays. These four aircraft account for 87 weekly departures from Modlin. The remaining three weekly flights (to Bourgas) are operated as a ‘W’ by an aircraft based elsewhere across Wizz Air’s extensive network of Central and Eastern European bases. The only services to depart before 06:00 are to Madrid (at 05:00) and Forli (at 05:35). The new airport terminal at Modlin looks pretty cold today during the current historically-cold winter, but it will be basking in sunshine when Wizz Air moves 19 routes there for the opening in July. And in case anyone was wondering why Warsaw Modlin's IATA Code is WMI, rather than the rather stylish “WMD”, as we all know, WMD is already allocated to Mandabe Airport in central Madagascar.