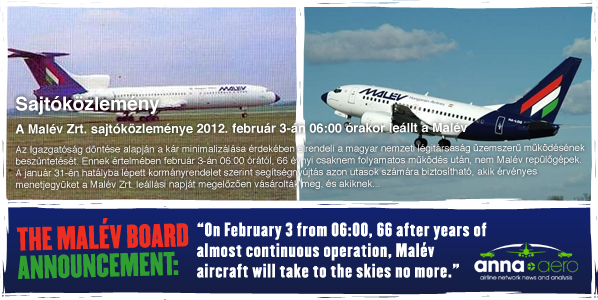 Malév’s cessation of operations today begs the question of what the route network implications are for Budapest Airport. During the current winter season, Malév has accounted for just over 42% of Budapest’s scheduled traffic, operating to 43 destinations non-stop. On 21 of these routes (accounting for 65% of Malév’s weekly seat capacity), passengers have had the choice of at least one alternative airline, while the remaining 22 routes are not served by any other carrier. For the upcoming summer season, Malév’s network was expected to grow to 54 non-stop routes, of which 27 would be served by at least one other carrier and 27 on which Malév would have been facing no direct competition.

27 routes of interest to other carriers?

The routes that are already served by other carriers will likely see frequency and/or capacity increases. But what of the other 27 destinations? These are summarised in the following table by country.

Some of these routes already face indirect competition to nearby airports, such as Wizz Air to Milan Bergamo and Gothenburg City. Another destination, Varna, was served during the summer by Wizz Air in the period 2007-09.

In terms of weekly seat capacity, Malév’s top three monopoly routes for this summer would have been Athens, Thessaloniki and Milan Malpensa. Aegean Airlines or Olympic Air would be the most likely candidates to serve either of the Greek markets. Olympic already has a considerable route portfolio from the Greek capital to destinations in south-eastern Europe, making Budapest a logical addition.

With bases in Belgrade, Cluj Napoca and Sofia, Wizz Air may be tempted to take up the reins on these routes. However, routes between cities in Central and Eastern Europe have proved challenging for the airline in the past so their interest in these routes is not a certainty.

Fellow oneworld alliance member Royal Jordanian may be tempted to take up the Amman route while Belle Air of Albania may consider taking over the Tirana route. The Hamburg route may be of interest to Lufthansa but probably not to airberlin that pulled out of Budapest some years ago, although it did once operate from Hamburg. The two Croatian routes may attract the attention of Croatia Airlines.

Overall then, the collapse of Malév is certainly not good news to passengers or Budapest Airport in the short term, but experience shows that within a year, the vast majority of the capacity and services currently provided by Malév will be taken up by either existing carriers, or new carriers willing to try their luck on routes with proven demand. Schedule quality, aircraft type, fares and service levels will all play their part in determining the success, or otherwise, of these potential operations.

In reality, however, it seems more likely that following in the footsteps of the national carriers of Belgium, Greece, Italy and Switzerland a way will be found to create a new Hungarian national carrier out of the ashes of the old one, possibly with a much smaller fleet and network, but also without all the financial ‘baggage’ that finally brought down one of Europe’s oldest airlines.