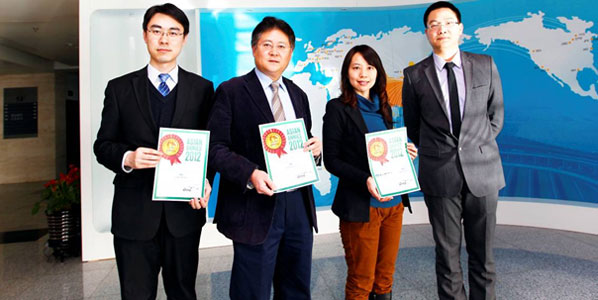 Award season is here. Worthy of being mentioned in the same sentence as the Oscars, Grammy Awards and the Golden Globes is of course anna.aero’s ANNIE prizes. The time has come for the second annual Asian ANNIES, awarded to airports and airlines for their achievements in the Asia-Pacific region.

Again, our awards are based on science, statistics and evidence rather than people’s opinions (and votes). Using OAG schedule data for almost 1,000 airports and over 200 airlines operating in the Asia-Pacific region, our team of data experts have pored over the figures and we think we have come up with a more transparent way of rewarding airlines and airports that have achieved notable route and traffic related success in the Asia-Pacific region during the last year.

Airport with the most new routes
Winner: Beijing  –  Runner-up: Kaohsiung

The Chinese capital airport is the clear winner of this prize, having gained a net of 18 new routes when comparing this month’s OAG data with that of February last year. Two routes have been lost – Tripoli (previously operated by Afriqiyah) and Chaoyang (used to be served by Air China) – but in return, the airport has gained 20 new routes. These new routes are notably a healthy mix of both domestic and international services. The new route with the highest frequency is that to and from Seoul Gimpo, which thanks to liberalisation now is served by four airlines; Asiana and Korean Air from the South Korean side and Air China and China Southern from the Chinese end.

Kaohsiung in Taiwan is the runner-up, having gained 13 routes, but lost one, resulting in a net gain of 12. All but two of the new routes are notably to Mainland China.

Eight of Beijing’s new routes are to and from outside of the Asia-Pacific region, minus the lost Afriqiyah service from Tripoli, giving the busy Chinese airport a net gain of seven long-haul routes; United from Washington Dulles, Ethiopian from Addis Ababa, Hainan Airlines to Zurich, Delta from Detroit, South African Airways from Johannesburg, Air China to Milan Malpensa and Düsseldorf and TAAG Angola from Luanda.
Because of the definition of a ‘long-haul’ flight for this award category is a flight from the Asia-Pacific region (as defined by anna.aero) to outside the region, it does allow for some shorter flights to be counted, such as flights in the periphery of the region analysed, for example between East Asia and the Russian Far East as well as between the Indian subcontinent and the Middle East.
While Beijing wins thanks to genuine long-haul services, there is a tie for the second spot between three other Chinese airports; Guangzhou, Harbin & Ürümqi each gaining four new routes. Guangzhou is now connected with both Amsterdam and Vancouver with its home carrier China Southern as well as with Saudi Arabian Airlines from Riyadh and Ural Airlines from Novosibirsk. Harbin’s new routes are all on Ural Airlines from Russia, while Ürümqi gained a Yekaterinburg route on RusLine, a route from Ust-Kamenogorsk in Kazakhstan on DETA and Tbilisi and Istanbul Atatürk services on China Southern (although the latter has been taken over from Hainan Airlines that launched the route last year). 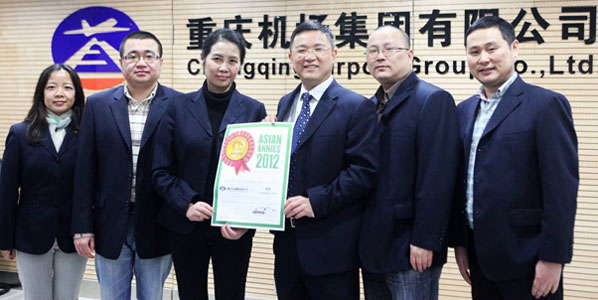 Chongqing Airport proudly celebrates winning the Asian ANNIE for attracting the most new airlines. Seen with the certificate are the team from the airport’s marketing department and Cao Qianli, deputy general manager (third from left).

For this prize, Beijing has to be satisfied with sharing it with its fellow Chinese airport serving Chongqing in Southwest China. Both airports have had a net gain of seven airlines since last February; in Beijing’s case eight new airlines, but also the loss of Afriqiyah. The capital airport gained three domestic airlines – Spring Airlines, Juneyao Airlines and Tibet Airlines – as well as five foreign; Jetstar, Alitalia, Swiss, South African Airways and TAAG Angola. Meanwhile, Chongqing is now part of the network of Hebei Airlines, Hong Kong Airlines, China Airlines, Qatar Airways, Air Macau, Asiana and TransAsia.

Without comprehensive passenger growth data available throughout the Asia-Pacific region that accurately gives a picture of the fastest-growing airports, these awards are based on the fastest growth in scheduled seat capacity as reported to OAG. The airports are divided into four different categories based on the airport’s size (measured by annual passenger throughput).

Bangkok’s growth is partly caused by services being moved over to the airport from the old Bangkok airport, Don Mueang Airport, due to that airport being closed because damages caused by the recent flooding that hit Thailand.

Airport with the most airlines
Winner: Bangkok – Runner-up: Beijing

The ‘planespotter award’ to the airport that boasts the most different airlines goes to Bangkok. At 85 airline customers this month, the airport is still a fair bit ahead of Beijing that welcomes 74 airlines to its facilities.

In part thanks to its regional expansion with the new fleet of Q400 aircraft, SpiceJet takes home the prize for the airline launching the most new routes in the Asia-Pacific region. After the deduction of seven dropped routes, the fast-growing Indian low-cost airline’s net gain is 32. The runner-up is Hainan Airlines, which may have launched more routes, but also dropped 17 from its network and thereby ending up at a net gain of 30 for the Chinese airline.

Again, the definition of long-haul may not fit the usual description, but what is measured is routes from within the Asia-Pacific region to outside. This is the award that see the most ties. Three airlines jointly win with a net gain of each five ‘long-haul’ routes. Biman Bangladesh now flies from Dhaka to Dammam, London Heathrow, Bahrain and Rome Fiumicino as well as from Sylhet to Dubai. Ural Airlines now flies to Harbin from four Russian airports and to Guangzhou from Novosibirsk, while nasair has added seven routes from Saudi Arabia to India and Pakistan, and dropped two.

Runners-up are IndiGo, Air India Express, S7 and SriLankan Airlines, which each have launched three routes meeting the criteria. The airline adding the most airports to its network is a start-up airline. Air KBZ in Burma commenced operations in April last year and now serves 14 airports.

The Burmese start-up carrier Air KBZ, which began operating in April last year, wins this award for now serving 14 airports – all domestic destinations in Burma – with its fleet of two ATR72-500s (fleet count according to ch-aviation.ch).

Runner-up is Hainan Airlines, which has added a net of 13 airports to its network compared with last February. 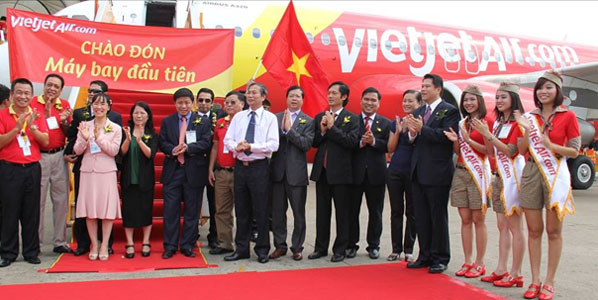 VietJet Air’s domestic low-cost operations in Vietnam has made it the biggest new airline operating in the Asia-Pacific region.

In spite of Air KBZ (above) adding so many new destinations, the capacity it offers is not sufficient to win this prize. Instead, it is the Vietnamese start-up LCC VietJet Air that offers the most seat capacity in February out of airlines that had no operations in the Asia-Pacific in the same month last year. At almost 65,000 seats offered this month, the airline is safely ahead of runner-up Tibet Airlines (53,000 seats) and Air KBZ (33,000).