Panama: the one airport – one airline set up Mark Schwab, recently appointed CEO Star Alliance, Roberto Junguito, CEO Copa Airlines Colombia, and Fabio Villegas Ramirez, CEO AviancaTACA, paved the way for tighter cooperation within the region as Copa Airlines and AviancaTACA are set to join the alliance, but Panama’s full potential is yet to materialise as its skies open up. Further upgrades of facilities at Panama City are essential.

Previous anna.aero analyses have looked at Panama’s remarkably profitable Copa Airlines at two occasions in 2008 and 2010, but with the carrier gearing up for Star Alliance accession later this year, a broader analysis of the situation on the airline’s home front is due. 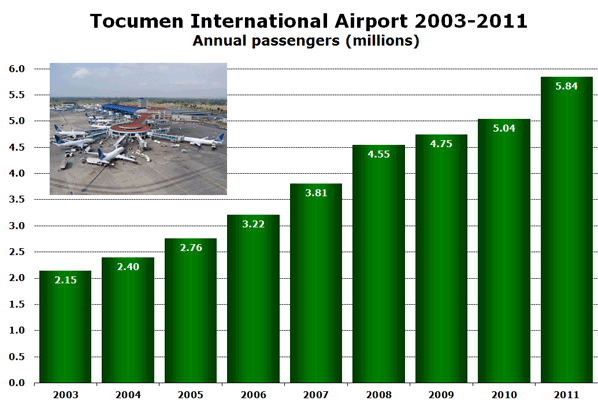 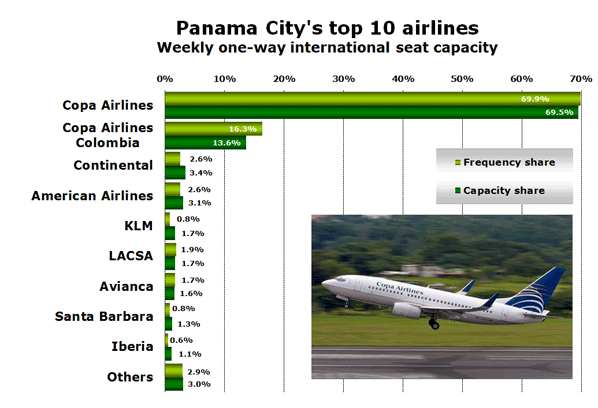 Total traffic at Panama City’s main airport has almost tripled since 2003, achieving an average annual growth rate in excess of 13%. This has largely been driven by the local carrier Copa Airlines’ dynamic expansion. The airline grew its capacity by 20% in 2011 only, heavily focusing on developing its ‘Hub Americas’ transfer hub between North and South at Panama City.

Copa makes up for almost 70% of the airport’s capacity at the moment, having lost two percentage points on last year’s figures. However, if including the recently rebranded Copa Colombia (previously AeroRepublica), Copa’s capacity share at Panama City goes up to 83%, leaving competition with a small share. For 2012, Pedro Heilbron, Copa’s CEO, anticipates similar rates of growth to that of 2011, with Copa Group set to reach the 10 million mark in annual passengers. This year should also see further ten aircraft join the fleet, bringing its total to 83 Boeing 737-800s.

The airline’s first new routes out of Panama City for later this year have already been announced and include Curacao (CUR), Liberia (LIR), Recife (REC) and Las Vegas, NV (LAS), but further are expected as Panama enhances its open skies agreements with Mexico and Brazil later this year. Other carriers, notably so the fast-moving Mexican budget airlines, could potentially take advantage of this agreement. 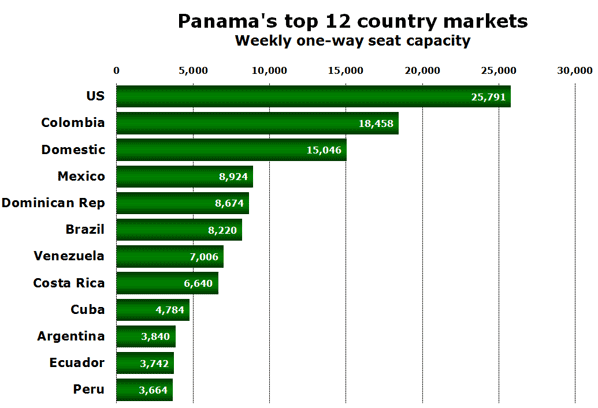 Transfer passengers account for about 40% of traffic at Panama City and the airport now offers more unique city pairs than LAN’s Lima or AviancaTACA’s Bogotá. However, as the future of transit tax at Panama City is yet to be decided, a certain level of uncertainty about the hub’s future remains.

United States leads as the top country market in Panama in terms of capacity. A total of 12 US destinations are served in winter 2012, including ten offered with at least daily frequency. Copa provides 109 weekly flights to seven destinations, while Continental and American each serve two, albeit different, destinations with 23 weekly frequencies. At 53 weekly services, Miami is the US destination served with the highest frequencies.

Panama’s European network is limited and constitutes a modest 1.3% of the country’s overall international capacity. The only carriers to provide links to the continent are KLM with its daily Amsterdam service and Iberia’s five weekly connections to Madrid.

The following table shows new routes launched in Panama in the last year as well as those already announced for this year. Notably, all routes are on Copa Airlines from Panama City’s Tocumen International Airport. 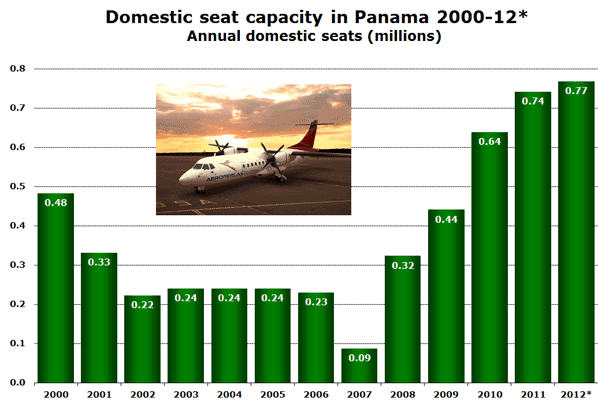 Unlike Copa-driven international markets, Panama’s domestic market is yet to live the explosion of air services, but has been growing steadily and has doubled since 2000. Since Copa does not operate any domestic services, the domestic market is divided evenly between two carriers. Air Panama operates a range of 11 low-density domestic routes providing 75 weekly frequencies across its network, while Aeroperlas offers 66 weekly flights connecting six destinations providing slightly higher overall capacity.