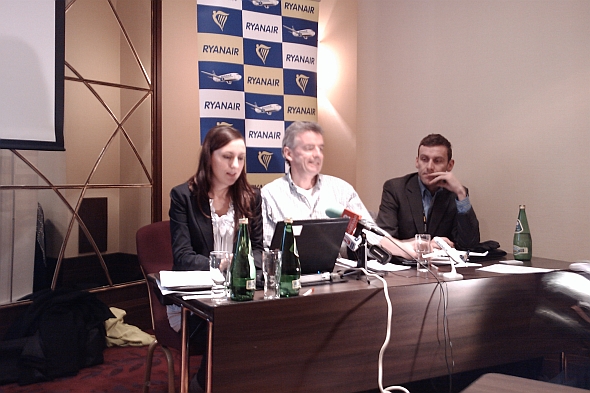 Today at the Warsaw Marriott: Low-cost airlines love to be nasty about each other, but it's not that often that they set out to directly compete. However, Ryanair's new batch of Warsaw Modlin services will compete on seven of Wizz's 20 routes. After spreading rumours that it would launch up to 40 routes, Ryanair CEO Michael O’Leary announced eight services this morning flanked by Kasia Gaborec, Sales and Marketing Executive CEE, and Stephen McNamara, Head of Communications. We are delighted to give our friends at Fly4free.pl full credit for this news photo.

Let battle commence. It seems that Warsaw Modlin is to be location for the first major head-to-head confrontation between Ryanair and Wizz Air for the hearts and minds (and cash) of Polish travellers and those wanting to visit Warsaw. After Wizz Air last week announced a four aircraft base serving 19 destinations at the airport starting in mid-July, Ryanair has now announced that it will serve the new airport from eight of its bases across Europe. Four of the eight routes (Brussels Charleroi, Budapest, Milan Bergamo and Stockholm Skavsta) will see direct competition between the two LCCs while three others (London, Oslo and Rome) will see the two competing indirectly by serving different airports in the same city.

Dublin is the only city that Wizz Air does not serve. Instead it will serve Cork which is a completely different market.

In Warsaw, Ryanair’s Michael O’Leary said: “Ryanair is pleased to announce our first eight Warsaw routes to Brussels, Budapest, Dublin, London, Milan, Oslo, Rome and Stockholm when Warsaw Modlin airport opens on 16 July next. Ryanair’s eight new Warsaw Modlin routes will deliver at least 700,000 passengers per annum and sustain 700 local jobs. Now Polish consumers/visitors can beat the recession and escape both LOT and Wizzair’s high fares by switching to Ryanair’s lowest fares and our no fuel surcharge guarantee flights to/ from Modlin Airport.”