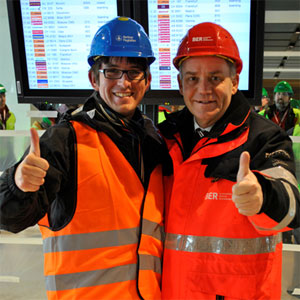 anna.aero’s Ross Falconer and Prof. Dr. Rainer Schwarz, CEO Berlin Airports. We were eager to learn how the new airport would improve the prospects of Berlin as a proposition for airlines…

anna.aero’s Ross Falconer was there yesterday and took the opportunity to ask Prof. Dr. Rainer Schwarz, CEO Berlin Airports, some testing questions on the new airport from a network planning perspective.

anna.aero: From a route development point of view, what does the new airport change? In what ways will BER make Berlin a better prospect for airlines?

Prof. Dr. Schwarz: For the first time since the end of World War II, air traffic in Berlin will be concentrated at a single airport. This will turn BER into a hub, reduce operating costs and increase productivity. Moreover, the excellent transport links will increase the airport’s catchment area. Inbound traffic is also increasing due to Berlin’s growing popularity with business travellers and tourists alike.

Merging the three Berlin airports into one is a big step. Until now, we have effectively had two markets – with business traffic in the north of Berlin and tourist traffic in the south (Schönefeld). Now those markets will come together and we will see what kind of competition there is between our three main airlines – Lufthansa, airberlin and easyJet. 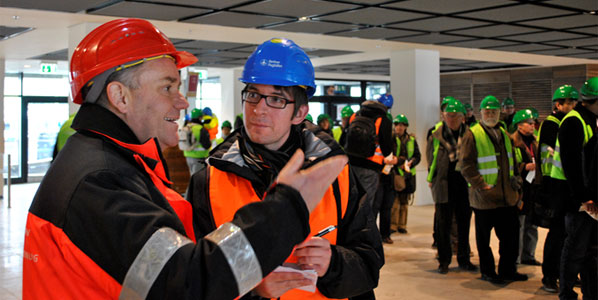 Trial passengers test the new systems at BER by checking in for three ‘flights’ – Lufthansa to Frankfurt, airberlin to Oslo and easyJet to Geneva (easyJet is considering adopting this headgear for all its flights if the trials are successful).

anna.aero: What plans for long-haul services do you have from the new airport?

Prof. Dr. Schwarz: We have already made big steps forward. A few years ago, there were no long-haul connections from Berlin, now we have about a dozen, including New York, Beijing and Abu Dhabi. We are confident that we can expand our long-haul network over the coming years.

anna.aero: What can low-cost carriers expect at BER?

Prof. Dr. Schwarz: Our North Pier is dedicated to the low-cost business model. The main difference is that it has walk-boarding positions instead of jet bridges. We have had good feedback from easyJet, germanwings and others who are looking to expand their business in Berlin.

anna.aero: As airberlin joins oneworld, how will you work to build BER as an alliance hub?

Prof. Dr. Schwarz: airberlin will continue to build an international hub here. A new route to Abu Dhabi was launched two weeks ago and soon there will be a new route to Los Angeles. A celebration to mark airberlin joining the oneworld alliance will take place in Berlin on 21 March.

airberlin is the largest airline in Berlin and we are working very closely with our home carrier, as well as the other oneworld airlines, to support them and to convince them of the attractiveness of the new airport.

anna.aero: With Lufthansa’s announced expansion at BER, will the airport become the airline’s fourth German hub?

Prof. Dr. Schwarz: Lufthansa will have six more aircraft based in Berlin when BER opens, so it will have 15 aircraft at BER in total – that is quite a number. Lufthansa will expand its European network by opening 30 new routes from Berlin this summer. The carrier’s strategy in Berlin is focused on point-to-point traffic within Europe and we are very happy with their decision to increase their presence so significantly.