While TAM and GOL still dominate the Brazilian domestic market, Azul is gradually increasing its share. By the end of last year, the low-cost airline almost reached a 10% share of the market and it has already added a new destination to its network; Londrina.

The number of passengers passing through Brazil’s airports last year was just shy of 180 million, up almost 16% on 2010, and the third straight year that the country has recorded double-digit growth in demand. Domestic traffic is still dominant, accounting for almost 90% of all passengers and grew by 16% compared with 14% growth for international traffic. Domestic and international growth fell below 5% in November for the first time since 2009. 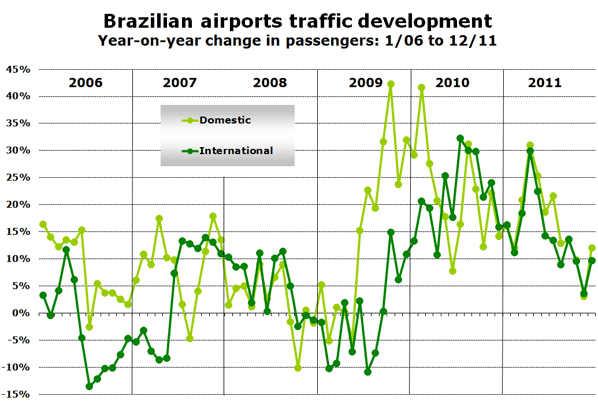 In the last three months of 2011, TAM once more moved ahead of GOL in terms of domestic market share and by December had worked up a lead of some five percentage points, 40.5% to 35.1%. The two carriers combined saw their domestic dominance fall further to 75.6%, meaning that a quarter of domestic demand now flies on other carriers, led by Azul whose market share is now within touching distance of 10%. 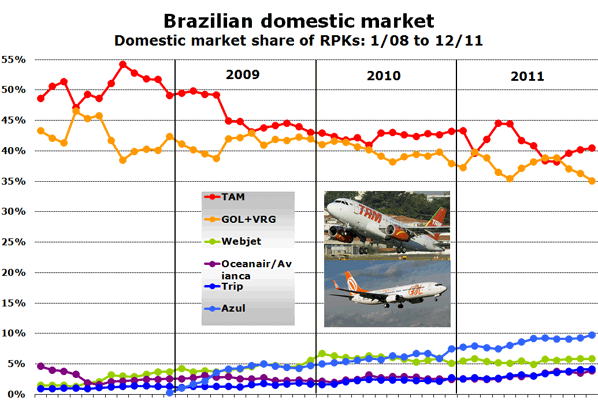 Airport traffic data for 2011 for Brazil’s airports shows that Sao Paulo’s two main airports at Guarulhos and Congonhas handled almost 47 million passengers last year. With both the FIFA World Cup and the summer Olympics heading for Brazil in the next few years, the country’s need to address important airport infrastructure issues is growing. 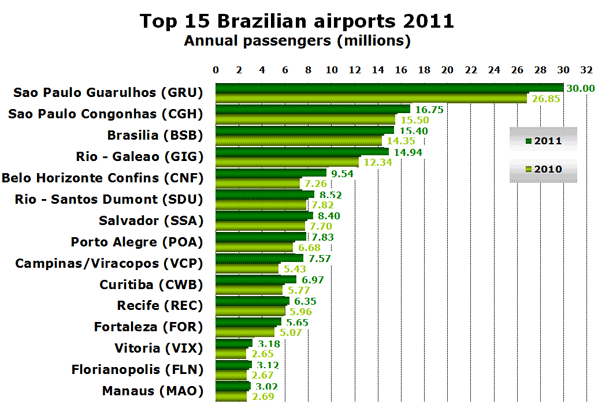 Last week, the government announced that three consortiums (each consisting of local contractors and international airport operators) had been selected in an auction to build and operate new terminals at Guarulhos, Campinas/Viracopos and Brasilia. Between them, they had agreed to pay over US$14 billion for the privilege, a figure well above the government’s expectations. The international operators involved are from Argentina, France and South Africa.