European airport passengers up 7% in 2011 to over 1.6 billion; which countries and airports saw highest growth?

With passenger traffic data for all of 2011 now available for well over 300 of Europe’s airports, anna.aero this week takes a closer look at how different countries and airports compared during what was another challenging year for many European economies. The good news was that there was no disruption to flights from either volcanoes or extreme snowfalls, although labour issues meant that there were a number of strikes across Europe that disrupted demand slightly in various months.

anna.aero’s database of traffic and trend data for well over 300 European airports (plus Morocco, which has an open-skies agreement with the EU) shows which countries have been most (and least) affected by on-going economic and aviation developments. 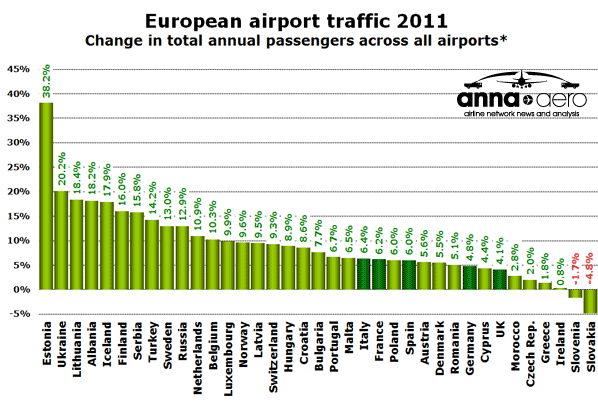 Source: Various - * In some cases, data for only the largest airport in a country has been used (eg. Keflavik for Iceland, and Kiev Borispol for Ukraine). Some airports have only reported traffic data to November in which case anna.aero has estimated the data for the whole year. For Morocco, data is based on January-November. NB: Dark green bars highlight Europe’s five biggest air travel countries; France, Germany, Italy, Spain and UK.

Estonia (represented solely by Tallinn) reports the highest national growth of almost 40% thanks to Ryanair’s decision to launch flights to the airport starting in December 2010. By early 2011, the Irish LCC was serving the Estonian capital from nine of its bases across Europe, resulting in massive traffic stimulation at the airport.

Among Europe’s ‘big 5’ aviation markets, the UK fared worst with growth of 4.1%, while Italy did best with 6.4%. The imposition of an ‘eco-tax’ in Germany resulted in demand there growing by just under 5%, despite having the healthiest economy in the EU.

Summed across all countries, total passenger numbers at Europe’s airports were up around 7% to just over 1.6 billion. This is not the same as counting passengers on airlines as airport passengers are counted twice, once at each end of their journey. The UK (222 million) still leads from Spain (204 million) and Germany (199 million), with Italy (149 million) and France (141 million) some distance behind. Turkey (117 million), which passed the 100 million mark in 2010, has now been joined by Russia, which saw passenger numbers at all of its airports grow by almost 13% to 112 million in 2011.

The performance of individual airports (handling at least 100,000 passengers per annum) across Europe varied from those where passenger numbers increased by more than 50% (two airports) to those where traffic was down more than 20% (six airports). Below are listed the top 10 airports at both ends of the performance spectrum.

Italian airports take the top two positions in both rankings, although Venice Treviso’s position is rather false as its runway was closed for several months for maintenance. In 2012, it is likely to be close to the top of the table of fastest-growing airports in Europe. The top 10 fastest shrinking airports include three in the UK, two in Spain and two in Italy. Only just outside the top 10 of this listing were Ryanair’s two biggest bases in Germany; Hahn saw traffic fall by 17.2%, while Weeze passenger numbers were down 16.4%. Girona is likely to bounce back after Ryanair decided to add back capacity at the airport in 2012, having removed routes and aircraft in 2011.

For more detailed figures on the performance of Europe’s airports, click here.