Happy Valentine’s Day: This year’s celebration by Southwest crew at Greenville-Spartanburg may lack the sophistication of Spirit’s campaign a year before, but both carriers are jointly driving South Carolina’s traffic with a combined total of 14 new routes launched in 2011 only. Beginning in May, Spirit will also cater for Texan golfers, as it launches a direct service between Dallas/Fort Worth and Myrtle Beach. 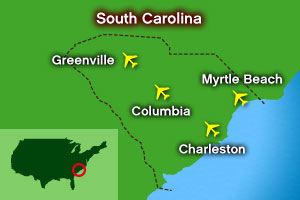 South Carolina may not have any major hub airport, but traffic development in the US state is still remarkable. Two of its airports – Charleston (CHS) and Greenville-Spartanburg (GSP) – scooped two out of four American ANNIES in the airport traffic growth category. Other airports within the state reported more moderate increases of 2.4% and 1.2% at Columbia (CAE) and Myrtle Beach (MYR) respectively. Although neither Hilton Head (HHH) nor Florence Regional (FLO) have reached the 80,000 annual passenger mark quite yet, each noted growth in excess of 20%, as US Airways expanded its presence at both locations. 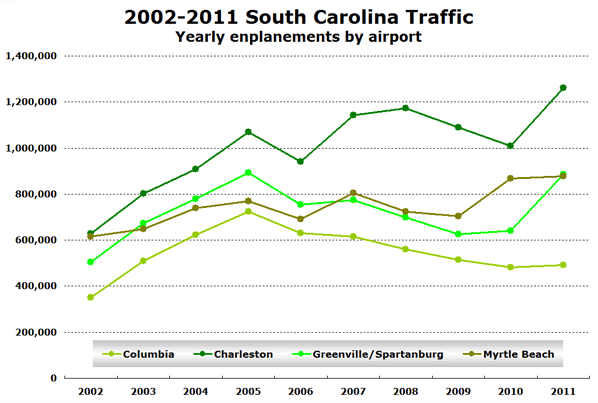 The two American ANNIES airport winners won thanks to Southwest’s decision to grow in South Carolina. The low-cost carrier launched a combined nine routes to the state last year. New services from Baltimore/Washington, Chicago Midway, Houston Hobby and Nashville helped Charleston increase its monthly traffic by 24% over February 2011, while a total of five new routes that started at Greenville-Spartanburg in mid-March brought the airport’s monthly seat capacity up by almost 40%.

In spite of reporting record number of passengers in 2011, Myrtle Beach has fallen short of achieving its initial goal of one million, as it improved by only one percentage point over 2010 figures. Notably, first quarter growth of 9% was followed by traffic drops of up to 12% year on year in the second half of 2011, resulting in weak overall growth figures. The declines are attributable to some of the seasonal services starting later and finishing earlier in the year, as airlines such as Allegiant shifted aircraft to different cities. 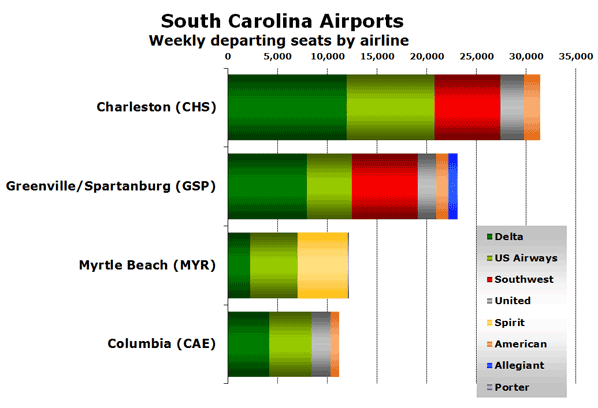 To-date, Columbia has not been fortunate in retaining budget services and is now South Carolina’s only large airport to be served exclusively by legacy carriers. Both Allegiant and Spirit had served the airport before, but the services have been discontinued. The latest attempt, undertaken by Vision Airlines in mid-2011 and involving Destin-Fort Walton, FL, was cut just over a month after launch. Out of five carriers that currently serve the airport, only Delta and United has scheduled capacity increases, although no new routes have been announced so far.

Notably, Delta and US Airways are the two legacy carriers to see their South Carolina networks change the most, following the recent slot-swap, which involved New York LaGuardia and Washington Reagan. As a result, this summer will see Delta launch a daily service connecting LaGuardia and Myrtle Beach, while US Airways discontinues all three destinations in South Carolina, which included Charleston, Columbia and Greenville-Spartanburg.

Allegiant has operated a number of seasonal routes out of Myrtle Beach since it entered the market in 2009. Even though 2012 will see routes to Grand Rapids, MI and Knoxville, TN fall out of the carrier’s network, the airline will more than double its summer capacity at Myrtle Beach this year, increasing frequencies to the remaining four destinations. Further growth at Myrtle Beach will be partly fuelled by network growth, as it is the first (and currently the only) airport in South Carolina to see new routes announced in 2012.