OLT Express announces 17 new domestic routes in Poland; at least six of them will be operated with Airbus aircraft 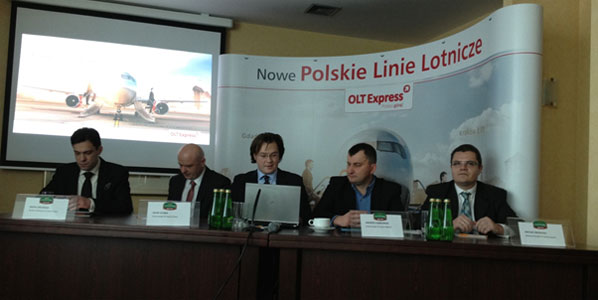 At a press conference earlier today, OLT Express announced 17 new routes to be launched as early as April 2012 connecting nine cities across Poland. Notably, at least six of the new connections will be operated with A319 and A320 aircraft, leading to a significant increase of domestic capacity in the country. All new routes will be operated with at least daily frequencies and scheduled to enable connecting opportunities.

Eight routes will compete directly with either LOT Polish Airlines or Eurolot. LOT might be particularly affected, as it will see four destinations out of its Warsaw hub confronted with steep capacity increases, as OLT Express employs its Airbus fleet on services to Gdańsk, Poznań, Wrocław and Szczecin. OLT Express will be LOT’s first ever competitor on domestic routes out of the capital and the new entrant does not consider relocating to Modlin once the airport opens later this year. In the case of Eurolot, only the service linking Gdańsk and Kraków will be served with A319 aircraft, although further three markets are set to see new competition.

In Warsaw, Rafał Orłowski, Board Member OLT Express, described the venture as “a large project, which involves connecting Poland’s main airports directly and not via Warsaw, which was the case to date”, while Jarosław Frankowski, OLT’s Project Director assured, that the airline “does not aim at biting into LOT’s or Eurolot’s customer base, but wants to attract people, who would otherwise have used rail or road transport”.