Delta now has to face another giant in its Atlanta home as Southwest Airlines moves in. Southwest CEO Gary Kelly let the balloons drop to the delight of the airline’s Atlanta staff. In return, Southwest has downscaled in Philadelphia, where it faced another dominant legacy carrier; US Airways.

Last year, Southwest grew its enplaned passenger numbers by 3.3% and increased the number of flights operated by 2.4%, although in the final quarter, passengers and flights were up by less than 1%. With fuel prices still at very high levels, analysis of OAG schedule data suggests that the number of flights which Southwest plans to operate this July will be around 2% down on the same period last year. But within that relatively small reduction in operations, which airports are seeing more Southwest flights and which will be seeing fewer? 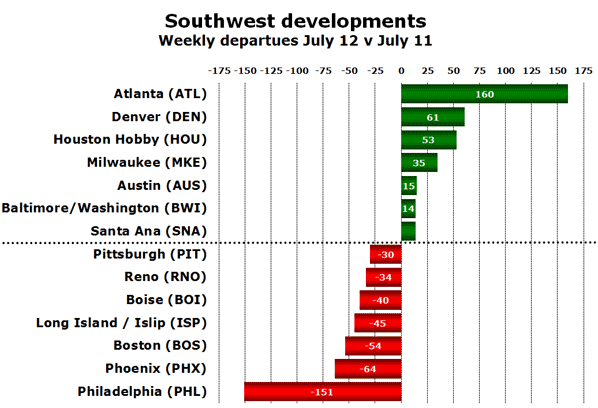 This week saw the launch of Southwest’s own flights from Atlanta, the world’s busiest airport, and home base of AirTran, the airline that it has acquired but which still operates as a separate entity. By July, it will be serving eight destinations non-stop from Atlanta with 160 weekly departures making it, not surprisingly, the fastest-growing airport on the airline’s network, well ahead of Denver, Houston Hobby and Milwaukee. The change (either up or down) between July 2012 and July 2011 in the number of weekly flights at half of the airline’s 73 airports is no more than the equivalent of one flight per day, suggesting considerable stability overall.

Five routes axed at Philadelphia; moral victory for US Airways

Looking at which airports have seen a noticeable reduction in Southwest flights reveals that Philadelphia has seen five routes dropped, equating to over 20 daily departures, or 40% of the airline’s previous presence at the airport. Service to Jacksonville (Florida), Manchester (New Hampshire), Pittsburgh (Pennsylvania) and Providence (Rhode Island) was withdrawn in early January, while Boston flights ended last Sunday. All of these routes competed directly with US Airways who appear to have defended their base at the airport with some vigour, and success. Analysis of US DOT fare data published quarterly confirms how US Airways has competed vigorously with fares on average no more than 20% higher than those of Southwest. US Airways’ strategy is clear from the way in which average fares on its Boston route fell by almost two-thirds after Southwest entered the market in mid-2010.

Southwest’s problems in these five markets can be seen clearly by combining these average fare  figures with average load factor data to determine average revenue per flight. US Airways (which includes flights operated on its behalf by Air Wisconsin and Republic) has a far superior average load factor each month on all routes except Jacksonville. 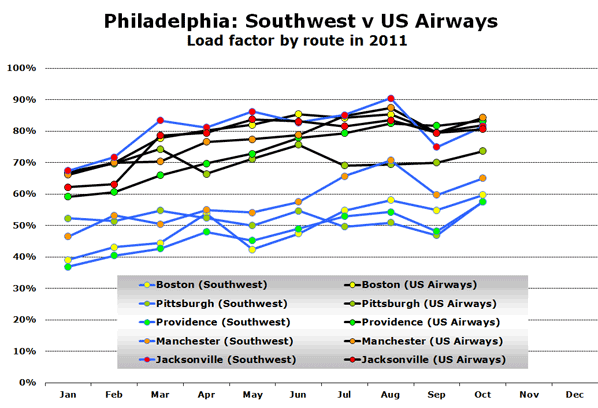 On the Boston route, Southwest’s average load factor for 2011 (to October) is around 50%, while for US Airways it is around 80%. On the Pittsburgh route, Southwest is just over 50%, while US Airways is over 70%, and on Providence, Southwest is again struggling to fill half of its seats while US Airways fills almost three-quarters. There is a 20 percentage point gap on Manchester as well with Southwest getting close to 60% and US Airways close to 80%. All of these four routes are served by multiple daily flights whereas the Jacksonville route is served just once daily by Southwest and three-times daily by US Airways. Here Southwest does achieve higher loads on average, but US Airways compensates by having a higher fare premium than on the other routes.

Given that the difference between Southwest and United’s unit costs has narrowed significantly in recent years, it seems that east coast passengers have decided to stay loyal to US Airways given the relatively comparable fares. Instead Southwest has retreated and used the freed up capacity to start its Atlanta operations.