The largest carrier within the Philippines, Cebu Pacific, is unsurprisingly also the leading airline in the city after which it is named. The low-cost airline is growing further at the airport to secure its position, but fellow LCC Airphil Express is also expanding.

Mactan-Cebu International Airport is at 6.2 million passengers in 2011 the second-largest airport in the Philippines, although it only has a quarter of Manila’s passenger turnover. The airport, which serves Cebu in central Philippines, has seen passenger numbers quadruple over the last two decades, with consistent, rapid growth reported since 2003. Last year alone, passenger numbers grew by 15%.

With the current terminal facilities only designed for 4.5 million annual passengers, a terminal expansion is due to be completed this year that will provide additional capacity. Next year, the construction of a second terminal will also begin. “That new terminal can give us additional 3.8-million capacity that should be good for another 10 years at a growth rate of 8 to 10 percent every year,” said the airport’s general manager Nigel Paul C. Villarete in an interview with Cebu Daily News last month. 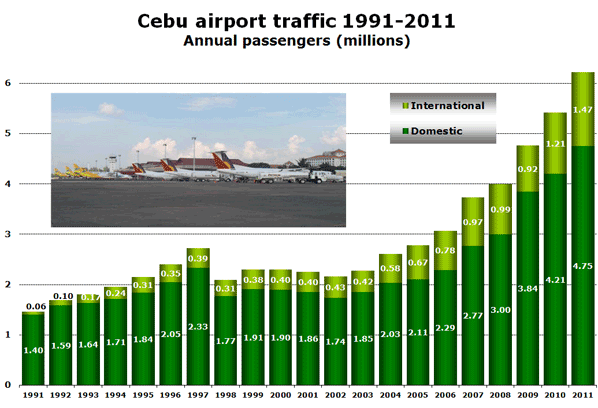 Domestic traffic dominates at Cebu with a 76% share of passengers at the airport; however, the emergence of international traffic is only recent. In the early 1990s, domestic passengers still stood for more than 90% of the passenger total and even today, only five international country markets are served non-stop from Cebu; South Korea, China, Singapore, Japan and Qatar.

In spite of the dominance of domestic traffic dominance, the domestic network largely is split between a wide number of routes, meaning that five of the airport’s top 12 routes by capacity are international services. After the by far most dominant route to the country capital Manila (over 36,000 weekly seats one-way), Seoul Incheon ranks as the Cebu’s second-largest route with almost 8,300 weekly seats. Hong Kong, Busan, Singapore and Tokyo Narita are also among the routes offered with the highest seat capacity.

Passenger flows are relatively constant throughout the year, with a peak-to-off-peak ratio last year of only 1.3. Traffic peaked in May at just over 600,000 passengers, while 460,000 passengers travelled through the airport in September. 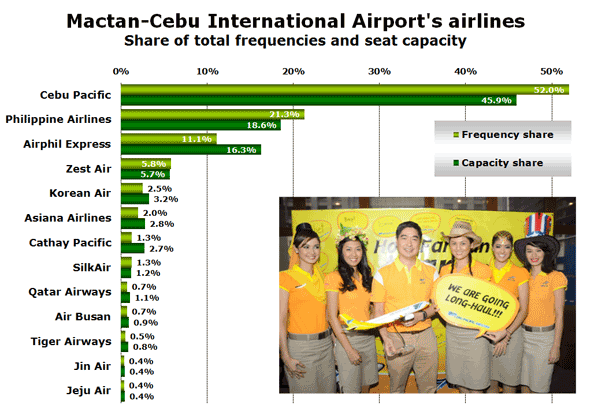 Cebu Pacific, which ranks as the largest domestic airline in the Philippines, is also the largest airline at the airport serving the city after which the airline is named. At 46% of seat capacity and more than half of all frequencies, the airline’s dominance is unthreatened. In fact, Cebu Pacific has been driving the growth enough to increase its dominance. A year ago, the airline’s seat capacity share was four percentage points lower – 42%, while both Philippine Airlines and Airphil Express were above the 20% mark.

The South Korean market’s status as the largest international country market is also visible in the fact that Cebu is served by no less than five Korean carriers; Korean Air, Asiana, Air Busan, Jin Air and Jeju Air.

Another notable airline serving Cebu is Qatar Airways, which operates the longest route to the airport; thrice-weekly with A330-300s on the 7,750-kilometre route from Doha. However, this route is being suspended at the end of the current scheduling season at the end of March, having operated non-stop since 2006 and prior to that via Singapore since 2003.

Low-cost carriers have led the new route expansion at Cebu in recent years. Since 2010, the airport has seen the launch of 15 new operations.

Airphil Express is currently expanding its regional domestic network out of Cebu. In addition to five routes launched earlier this month, five further are scheduled to follow in late March. However, these routes are operated with smaller Q400 aircraft and generally with relatively low frequencies, meaning that the expansion should not pose a considerable threat to Cebu Pacific’s continued dominance.