Prague Airport is the largest airport in Central and Eastern Europe and saw its passenger numbers grow rapidly even before the Czech Republic joined the EU, partly thanks to early liberalisation. Czech Airlines’ partnership with Etihad last year gave Prague a route to Abu Dhabi, making it the airport’s second route to a MEB3 hub after Emirates’ services.

The first few weeks of 2012 have seen some significant developments in Central Europe’s aviation scene. The demise of the Hungarian national airline Malev was the biggest news, followed by the decision of Ryanair to create a four aircraft, 30-route base at the airport. In Poland, Ryanair and Wizz Air have both revealed their initial plans for operations at Warsaw’s new second airport at Modlin, while OLT Express has announced plans for major growth in the Polish domestic market. In the Czech Republic, Czech Connect Airlines has ceased operations.

Analysis of airport traffic data since 1998 for the leading airports in Central and Eastern Europe – in Bulgaria, Czech Republic, Estonia, Hungary, Latvia, Lithuania, Poland and Romania – reveals which are the biggest airports and how quickly they have grown in recent years, especially since joining the EU. 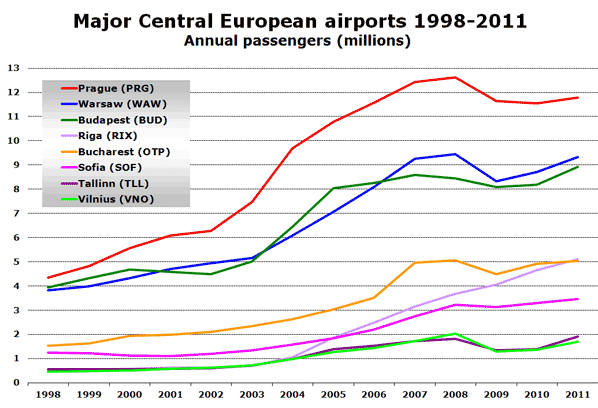 Throughout the period, Prague has been the leading airport in Central Europe, thanks partly to the country embracing aviation liberalisation even before the Czech Republic joined the European Union in May 2004. Budapest and Warsaw have been vying for second place. Until last year, Bucharest (Romania) was in a comfortable fourth place but it has now been overtaken by Riga (Latvia), which in percentage terms has been the fastest-growing airport in recent years, thanks to the development of airBaltic’s regional hub at the airport.

If the data is analysed in index form (1998 = 100) then the extraordinary growth of Riga can be seen more clearly. Starting from an admittedly small base of just over 550,000 annual passengers in 1998, the airport has seen passenger numbers grow from just over one million in 2004 to over five million in 2011. 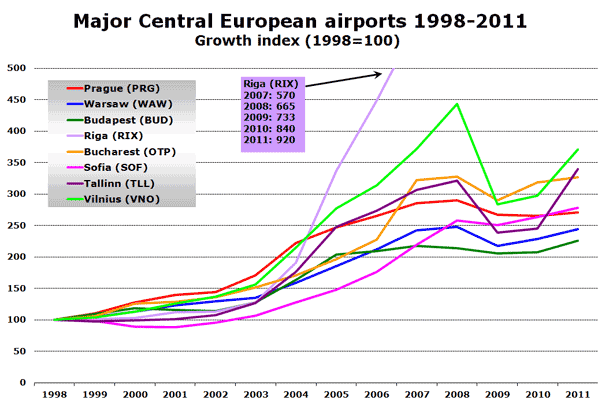 In index terms, Budapest has seen the least growth in recent years, clearly not helped by Malev’s difficulties and the apparent reluctance (until this summer) of Wizz Air to grow its operation at the airport. Tallinn and Vilnius both saw significant growth in 2011 thanks to the launch of several new services by low-cost carriers, notably Ryanair.