The non-MEB3s – how Gulf Air, Oman Air and Royal Jordanian are developing their networks 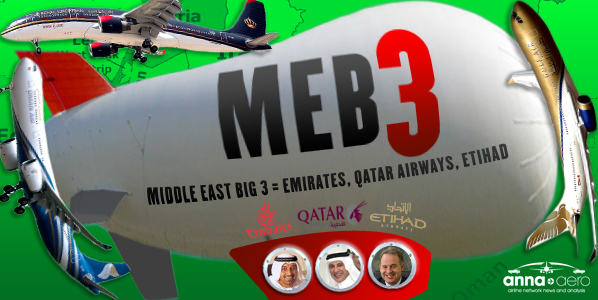 The MEB3 airlines (Middle East Big 3 - Emirates, Etihad and Qatar Airways) are gobbling up all the route opportunities, leaving the other non-MEB3s to concentrate mostly on regional or African destinations, rather than Asia, Europe or the Americas.

As the so-called MEB3 airlines (Middle East Big 3 – Emirates, Etihad and Qatar Airways) continue to add new routes and grow their fleet, what impact is this having on three other national carriers in the region? In terms of weekly ASKs (Available Seat Kilometres), Etihad, the smallest of the MEB3, is already four times larger than Gulf Air, the largest of the not-so-big 3. In recent weeks, both Gulf Air (based in Bahrain) and Royal Jordanian (based in Amman) have announced plans to cut routes and capacity, citing high fuel prices, the impact of political instability in the region, and the need to focus on profitable routes.

The above table clearly shows how Gulf Air, Oman Air and Royal Jordanian are in the second division of Middle Eastern airlines. Their average sector length is only around half of that of Emirates and Etihad, while the average aircraft size on routes is around 150 seats for all three carriers. Etihad and Qatar Airways’ average aircraft size is around 50% larger, while the average Emirates flight operates with around 325 seats, more than double the average of Gulf Air, Oman Air and Royal Jordanian.

New route focus is mostly away from Asia and Europe

A table of new routes started by Gulf Air, Oman Air and Royal Jordanian since the beginning of 2010 highlights how these carriers have focused their network developments mostly on regional or African destinations, rather than Asia, Europe or the Americas.

Two of the four European routes that Gulf Air has started recently (Geneva and Milan Malpensa) are both ending shortly, while the two destinations that Royal Jordanian recently revealed would no longer be served after April are also both in Europe (the Star Alliance strongholds of Brussels and Munich). Royal Jordanian’s two relatively new long-haul routes (Berlin and Kuala Lumpur) are both bases for future fellow oneworld alliance partners airberlin and Malaysia Airlines. Oman Air, which recently appointed Wayne Pearce (formerly of Qantas) as its new CEO, has had a smoother ride with relatively steady growth. Last year, passenger numbers at Muscat Airport, at which the airline accounts for around 55% of passengers, grew by 13% to 6.5 million.

Gulf Air’s CEO Samer Majali says: “These closures are pragmatic commercial decisions aimed at focusing services on routes with higher passenger traffic. Our commercial strategy, developed in 2009, delivered significant gains in 2010, but last year has been challenging. Therefore, we are now adapting our approach to address the challenges on an urgent basis.” 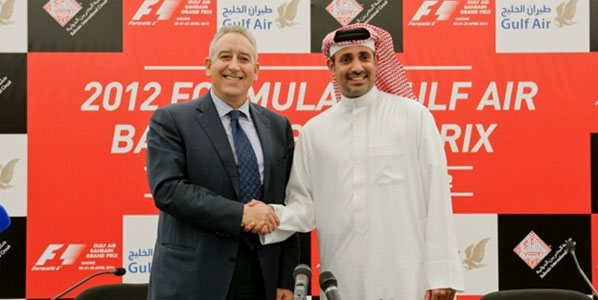 February 22: The Gulf Air Bahrain Grand Prix, is back on the F1 calendar after being cancelled last year because of the troubles. Samer Majali, CEO of Gulf Air, and Shaikh Salman bin Isa Al Khalifa, CEO of Bahrain International Circuit, announce that the April 20-22 weekend will adopt the slogan of “UNIF1ED – ONE NATION IN CELEBRATION.”

While the UAE and Qatar (home of the MEB3 carriers) continue to be seen as ‘safe’ destinations and transfer points, other parts of the region have had highly-publicised local issues which have impacted travel demand. Combined with oil prices, Bahrain and Jordan will face a challenging year ahead with Gulf Air and Royal Jordanian having already announced significant capacity cuts. Oman and its national carrier stand apart from this group in terms of political stability and the substantial will of its government to develop Omani tourism is a pragmatic way – although on a much more modest scale than the mega-tourism strategies of its UAE neighbours to the north.

As some of these carriers shrink and Etihad, Emirates and Qatar Airways continue to grow, the challenge of creating a profitable niche carrier in the region will intensify.