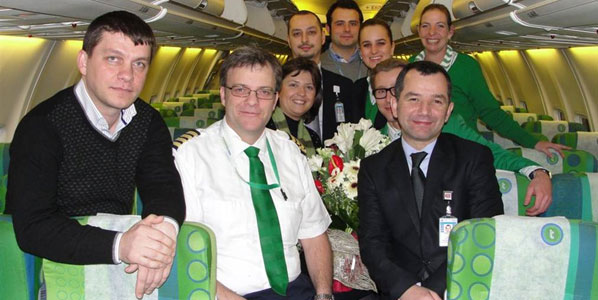 Last week, Transavia.com launched a new route to Istanbul Sabiha Gökçen from Eindhoven along with three other routes. By this summer, the airline will operate more routes and flights out of the Dutch airport than Wizz Air, although it remains only a fraction the size of Ryanair in Eindhoven.

Eindhoven Airport in the Netherlands saw passenger numbers grow by 23% last year to 2.64 million. The airport is dominated by LCCs with both Ryanair and Wizz Air having a major presence at the airport as well as Transavia.com, Air France-KLM’s Dutch-based hybrid carrier. During the last week, Transavia.com has added four new destinations from Eindhoven; to Istanbul (Sabiha Gökçen), Lisbon, Valencia and Venice Treviso. This brings to 16 the number of routes operated by the carrier from the airport, with a 17th (Berlin) scheduled to start from late April. Of these, two (Innsbruck and Salzburg) are winter-only services.

Transavia.com appears to have started scheduled services from the airport at the end of October 2006 with the introduction of ‘winter sun’ flights to Alicante, Faro and Malaga. Since then, the network has gradually expanded to its current size. 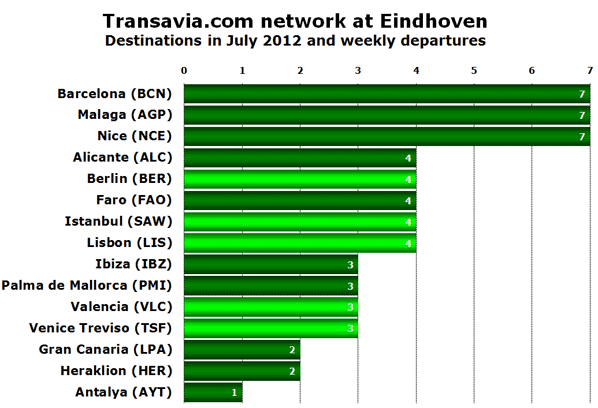 Barcelona, Malaga and Nice are the only destinations served daily this summer with the five new routes starting this year (highlighted in bright green) all being operated with either three or four weekly flights.

Wizz Air, with its focus on destinations in Central and Eastern Europe, is not a direct competitor, but Ryanair’s network of almost 30 destinations from Eindhoven includes Alicante, Faro, Gran Canaria, Ibiza, Malaga and Palma de Mallorca. This equates to direct competition on 40% of Transavia.com’s weekly departures.