First easyJet flight departed London Gatwick Airport for Barcelona in 2002. Ten years and over 70 million passengers later, it’s time to celebrate the successful relationship. According to Guy Stephenson, Gatwick Airport’s Commercial Director: “easyJet’s growth at Gatwick over the last decade is a fantastic measure of the airlines’ overall success”, but over the years Gatwick proved to be a significant nod in easyJet’s network, and will see the most capacity growth out of all airports served by the airline during summer 2012. 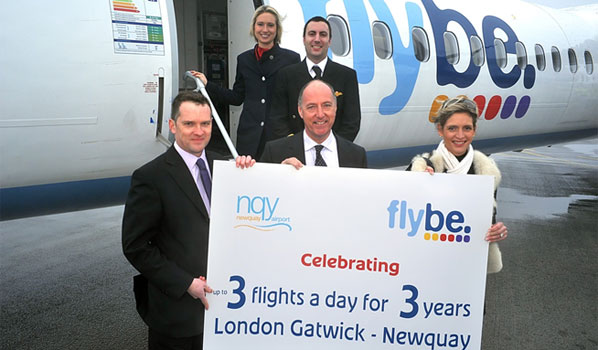 Free tickets for passengers in Row 3 mark Flybe’s celebrations of three years connecting Newquay Cornwall to the rest of the world via London Gatwick. Newquay Cornwall Airport’s Finance Director, Keith Marshall, commented: “This is an exciting year for the UK, with the Diamond Jubilee, Olympic Games and Paralympics. Flybe’s flights mean London is easily accessible by air. It also opens up the option to escape the hustle and bustle and relax in Cornwall” – an option which proved more popular so far as 55% of traffic is inbound to Newquay.