anna.aero’s analysis shows easyJet’s capacity is up around 7% this summer with 500 extra weekly flights fuelled by the growing number of A320s.

Europe’s second-largest low-cost carrier reported passenger numbers of 55.5 million in 2011, up 11.6% over 2010. The airline’s load factor also climbed 0.3 points to 87.5%. According to anna.aero’s analysis of OAG schedule data for the first week in August, easyJet’s capacity is up around 7% this summer, while the number of weekly flights has increased by around 500, representing growth of 6%. This difference is explained by the growing number of A320s that now comprise the airline’s fleet of over 200 aircraft. But where is the growth taking place and where is capacity being cut back? 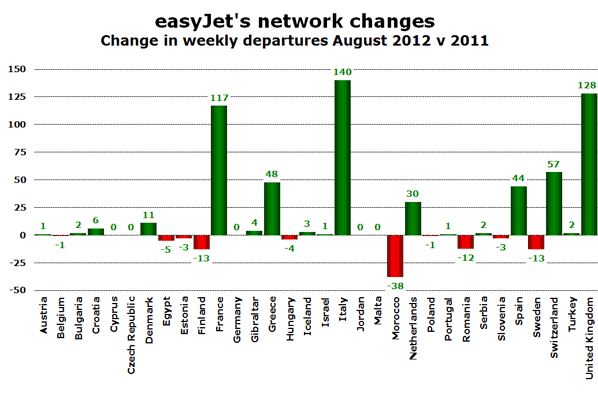 A total of 576 routes will operate this summer (up 52 on last summer), but the average weekly frequency across all routes continues to fall, from 8.1 in August 2010 to 7.8 this August. Out of 32 country markets served between August 2011 and August 2012 (Iceland is new for 2012, but Finnish and and Romanian services have ended), the number of flights has been reduced in 10 countries, with Morocco taking the biggest hit. The biggest increases in absolute terms are in the Italian, UK and French markets which each see an increase of between 100 and 140 weekly departures. The 48 additional flights from Greek airports represents growth of just over 25%.

The top three fastest-growing airports (in absolute terms) are all in the UK; London Gatwick leading the way, followed by the airline’s new base at London Southend (which opens at the beginning of April just in time for Easter), and Belfast International. In the rest of the top 10 are two French airports (Nice and Toulouse), two Italian airports (Rome Fiumicino and Milan Malpensa), two Swiss airports (Basel and Geneva), and Amsterdam. 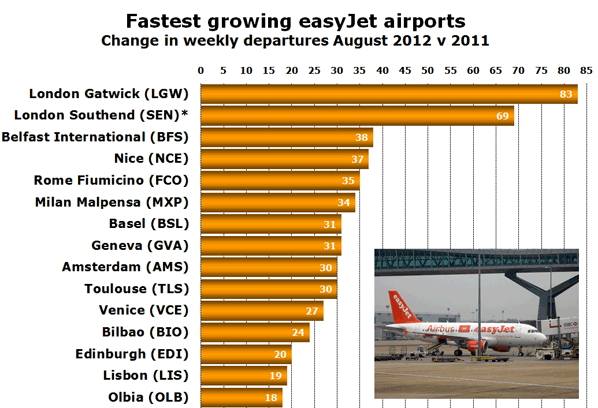 UK airports still account for one-third of all easyJet departures 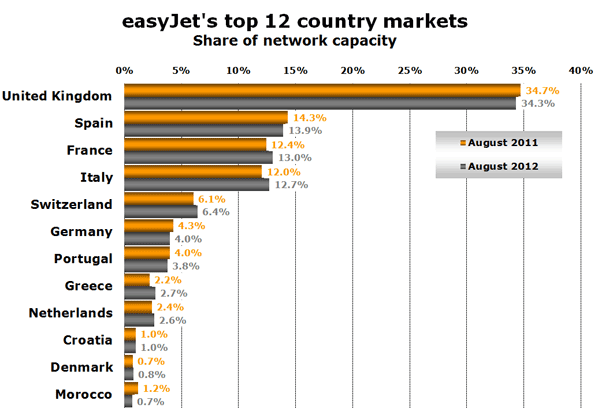 Considering the size of the air travel market, easyJet continues to be underrepresented in Germany, which accounts for just 4% of its flights, considerably less than Switzerland (6.4%), and only just ahead of Portugal (3.8%).

Gatwick-Barcelona offers most seats this summer

Thanks to the allocation of more of the airline’s larger 180-seat A320s to the route, the London Gatwick to Barcelona route will offer more seats than any other easyJet route this summer. However, in terms of weekly flights it ties with Gatwick-Malaga with 42 weekly flights (equivalent to six daily flights) each. A total of 12 routes are served with more than four daily flights this summer (compared with eight last year) and these are listed in the following table.

Six of these 12 routes are from London to Mediterranean ‘beach’ destinations, two are domestic routes (one each in the UK and Italy), while three are London Gatwick routes to major European cities (Amsterdam, Geneva and Milan).