Edmonton’s newly expanded terminal facilities allow for more cross-border traffic to the US, but an airline notably missing from the market segment is Air Canada, which is the leading airline at Edmonton in terms of flights. The Star Alliance airline’s main Canadian competitor WestJet does, however, offer more seat capacity at the airport as well as six routes to the US.

Edmonton is the capital of the Canadian state of Alberta, but is not as large as Calgary, its local rival located some 250 kilometres to the south. In aviation terms, Edmonton International Airport, which recently opened a new terminal area for transborder (US) flights, is Canada’s fifth-busiest airport behind Toronto, Vancouver, Montreal and Calgary. Overall passenger numbers were up 3.1% in 2011 with the dominant domestic market growing by 1.9%. However, international (non-US) traffic was up 5%, and transborder traffic was up just over 8%. Total passenger numbers of just under 6.3 million were the second-best in the airport’s history, after 2008. During 2011, the quarterly growth rates improved from 0.9% in Q1, to 2.5% in Q2, to 3.8% in Q3, and finally 5.1% in Q4. As a result, Edmonton is expecting a record number of passengers in 2012. 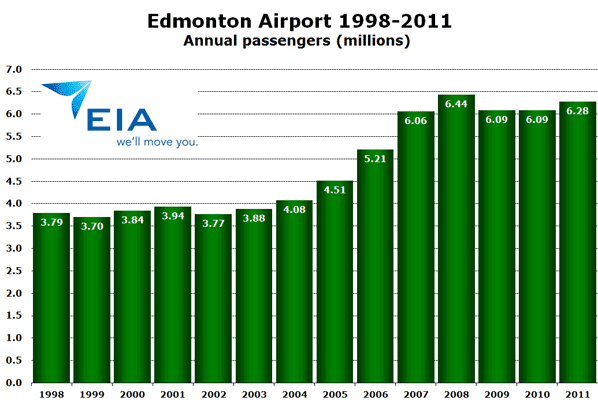 Nearly all of the airport’s growth in recent years occurred between 2003 and 2008 when passenger numbers surged by 66%, corresponding to a boom in the local oil-driven economy. The airport’s seasonality profile is very flat, with just under 500,000 passengers per month in the off-peak months, rising to almost 600,000 during July and August. 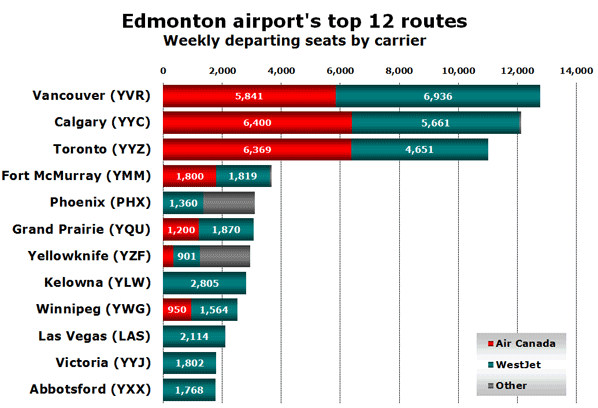 The top three routes are to Canada’s other big airports and capacity is shared fairly equally between Air Canada and WestJet. It is worth noting that non-stop flights to Montreal only operate once each day thanks to Air Canada.

Non-stop flights to 12 US destinations

Edmonton International Airport currently offers non-stop flights to 12 destinations in the US. Of these, only one, Phoenix, is served by more than one carrier. Air Canada does not operate any flights to the US, leaving it to its Star Alliance partners to feed their various hubs.

Apart from US services, the airport also offers non-stop scheduled flights to various destinations in Mexico (including Cancun and Puerto Vallarta), as well as Montego Bay in Jamaica and Varadero in Cuba. The airport’s only transatlantic service is to London Heathrow, which Air Canada serves with four weekly flights during the winter season, and daily flights during the summer. Since 2007, the route has generated around 100,000 passengers per annum, peaking at just under 120,000 in 2008.