Etihad names Washington as third US destination starting in March 2013; will become 12th MEB3 service to US 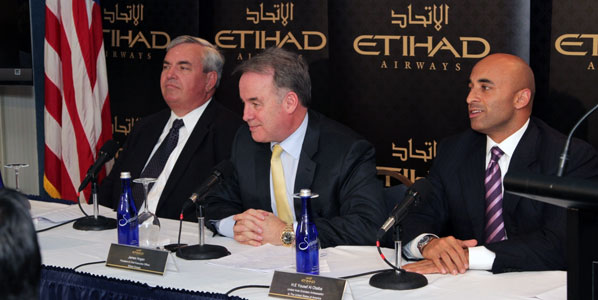 Etihad’s third US route will be to Washington Dulles, bringing the airline on par with its ‘MEB3’ competitor Qatar Airways. Announcing the new route at a press conference in the US capital were John E. Potter, Metropolitan Washington Airports Authority President and CEO; James Hogan, Etihad President and CEO; and Yousef Al Otaiba, UAE ambassador to the United States.

Etihad’s recent announcement that it plans to launch daily flights between Abu Dhabi and Washington Dulles (using an A340-500 starting in March 2013), is the latest in the growing number of non-stop services to the US to be offered by the MEB3 carriers from their home bases. Since Emirates began flights from Dubai to New York’s JFK airport in June 2004, there has been gradual rather than explosive growth in this market segment.

Emirates’ recent introduction of service to Dallas/Fort Worth has become the 10th US service operated by a MEB3 carriers (to the seventh different US airport), and will be followed on 1 March by Seattle becoming the 11th service and eighth different airport. Only New York JFK is served by all three carriers, while oil-rich Houston is served by both Emirates and Qatar Airways. Washington Dulles will become the third US airport to be served by more than one of the MEB3 carriers.

James Hogan, Etihad Airways’ President and CEO, said: “No other UAE carrier is offering nonstop services between D.C. and the UAE, so this capital-to-capital link is a huge opportunity for Etihad Airways. The point-to-point traffic between D.C. and Abu Dhabi is expected to contribute significantly to overall loads on the route. The schedule also allows maximum connectivity to key markets in the GCC, Indian Subcontinent and South East Asia. The Washington, D.C. metropolitan area ranks as one of the strongest-performing economies in the country. Demand for premium cabins from the market is significantly higher than from other potential US destinations, so we forecast that our award-winning Diamond First class and Pearl Business class will be very popular. A large and fast-growing population in the D.C. metro area, coupled with increasing ties to the UAE, means that the demand for travel across all cabins will only increase.”

John E. Potter, Metropolitan Washington Airports Authority’s President and CEO, said: “We congratulate Etihad Airways on this announcement. We are looking forward to welcoming them to our region, and we thank them for recognizing Washington Dulles International Airport as an integral part of the global aviation system.”