Back in October last year, it was still happy faces at Velvet Sky as the South African low-cost airline launched operations between Johannesburg and Polokwane. However, the airline has currently suspended operations temporarily to “resolve difficulties”. The airline’s presence in the market does, however, appear to have made a difference as South Africa’s domestic traffic last year grew faster than the international market.

Airport traffic in South Africa is dominated by O.R. Tambo International Airport in Johannesburg, which handles over half of all the country’s air passengers, and the vast majority of the country’s international air traffic. Last year, the airport saw passenger numbers grow by 3.3% to just under 19 million, having grown by 5% in 2010 when South Africa hosted the FIFA World Cup. While domestic traffic grew by 4.3% last year to just under 10 million, this is still almost 10% below the peak of 11 million achieved in 2007. International traffic, which had already set a new record in 2010, grew by almost 2% to pass eight million for the first time last year. 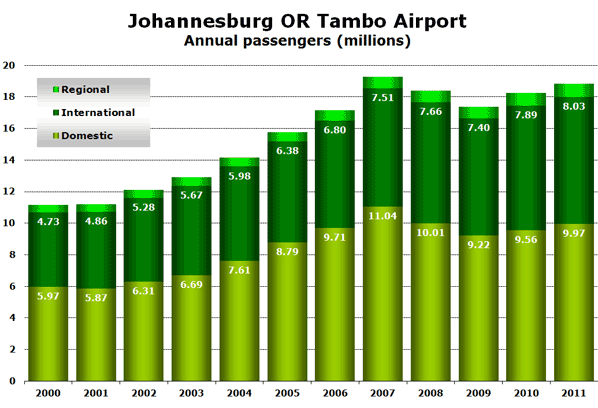 Unlike many global sporting events, which have apparently had very little impact on overall air travel demand in the host nation or city, the effect of hosting FIFA’s World Cup in June 2010 can clearly be seen by comparing monthly figures at Johannesburg on a year-on-year basis. 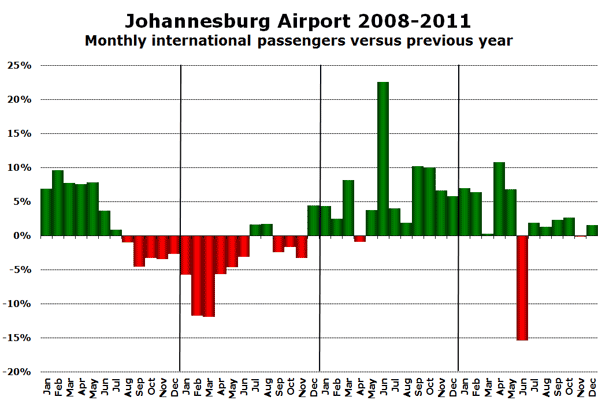 During 2011, the number of new services from Johannesburg airport was fairly modest. A new domestic carrier, Velvet Sky, began operations last March and now serves Cape Town, Durban and Polokwane with a small fleet of 737-300s. In addition, anna.aero noted the following new international services from the airport: