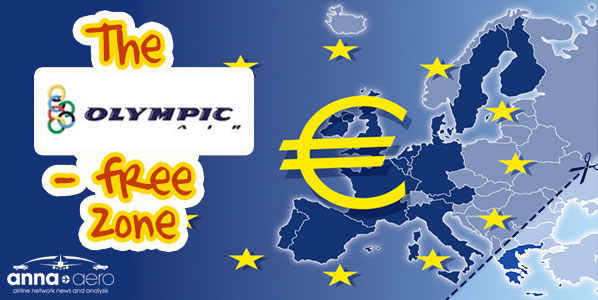 Since its creation in 2009, Olympic Air has gradually pulled out of Western European markets and the recent decision to drop Amsterdam services means the end of the airline’s operations to Greece’s ‘old’ EU friends.

When Olympic Air drops its route between its Athens (ATH) hub and Amsterdam (AMS) at the end of the winter scheduling season in a month’s time, it marks the end of the airline’s presence in the Western European market.

The route remains operated by KLM, which flies twice-daily but currently plans to reduce frequencies to daily in summer, as well as Air France-KLM’s low-cost subsidiary Transavia.com, which operates three times weekly, increasing to daily at the end of April.

It is now two years since the merger between the Greek carriers Olympic and Aegean was proposed and a year since it was rejected. While Aegean benefits through its Star Alliance membership from connectivity at its partner hubs in Western Europe, unaligned Olympic has been left to fend for itself.

Since the new Olympic Air was created in 2009, the airline has gradually moved out of Western European markets, becoming a niche airline in south-eastern Europe and eastern Mediterranean region. The following table shows the timeline of the country markets dropped by Olympic.

When the 2,200-kilometre Amsterdam route is dropped, the new Tel Aviv service will be Olympic’s longest at only 1,200 kilometres.