Emirates’ looong-haul arrival in Seattle makes the United Arab Emirates the US airport’s 11th international country market. Domestic traffic does, however, dominate at the airport where Alaska Airlines is the biggest, but facing considerable competition.

Last year, Seattle-Tacoma International Airport (often referred to as Sea-Tac for simplicity) had a record year, handling just under 30 million domestic passengers and just under three million passengers on international services. Its growth rate of 4% ranked it as the seventh fastest-growing among the top 20 airports in the United States, and helped it pass Minneapolis/St Paul to move into 16th place. Last week, the airport welcomed a new daily service to Dubai, which will be operated by Emirates using 777-200LRs. From Seattle, the non-stop service takes 14-and-a-half hours, while the return takes just under an hour longer. 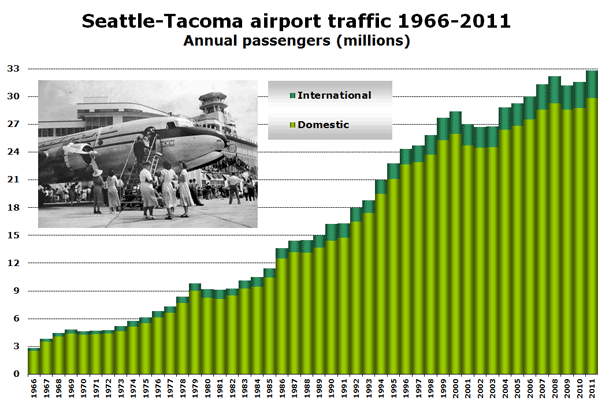 Sea-Tac’s biggest operator is Alaska Airlines, which along with its regional subsidiary Horizon Air carried just under half of all passengers in 2011. The top four airlines (Alaska Airlines, Horizon Air, Delta and Southwest) all grew their passenger numbers above the average for the airport as a whole, although the fastest-growing among the top 10 airlines were Frontier (+21%) and Virgin America (+12%). 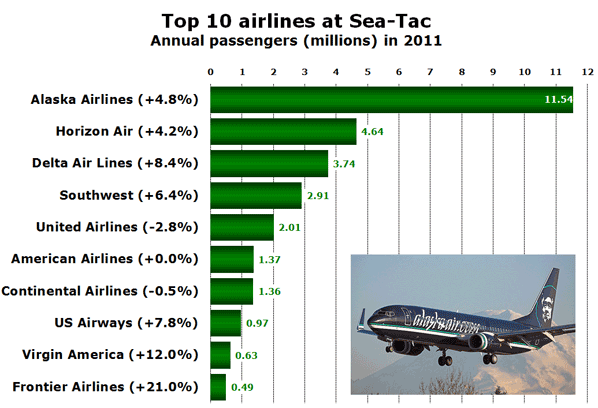 Based on aircraft movements, the most popular domestic regions served from Sea-Tac in 2011 were the Bay Area of California, Los Angeles, Portland (Oregon), Spokane (Washington) and Anchorage (Alaska). Alaska Airlines (combined with Horizon) offers at least 100 weekly departures on three routes from Sea-Tac. Topping the list is Portland (with 150 flights), followed by Anchorage (133) and Spokane (116). Several routes have three or more carriers serving them.

All this healthy competition ensures that air fares from Sea-Tac, especially on short-haul routes, remain well below the national average (adjusted for average sector length), according to figures published by the US Department of Transportation’s Office of Aviation Analysis.

The new Emirates service to Dubai in the United Arab Emirates brings to 11 the number of countries now connected non-stop to Sea-Tac. Canada with six destinations leads the way. In Europe, France, Germany, Iceland, the Netherlands and the UK are all served non-stop, while in Asia, China (Beijing), Japan (Osaka Kansai and Tokyo Narita), Korea (Seoul) and Taiwan (Taipei) are all served non-stop. From the end of March, the Paris CDG service will be operated by Delta, replacing fellow SkyTeam member Air France. Curiously, there are currently no scheduled services to any destinations in Mexico during summer, although Alaska Airlines operates three ‘sunshine’ routes seasonally in winter.